Running an ambitious project such as Hidden Treasures: Fresh Expressions was a challenge for under-resourced Rochester Cathedral which has a staff team of fewer than 25 FTE. Issues included staff changes, delays and large-scale plan changes due to an unexpected discovery of Norman archaeology, and rising costs of works due to a delay in the tender process.

Now at the end of major works, there is a feeling of frustration that the project has not yet fulfilled all its aims, but also of hope that incomplete project strands can be woven together to create a successful final outcome.

Rochester has a large collection of important texts, manuscripts and artefacts. It also has a large but underused library collection available for researchers. A major aim of the project was to ensure that the collections and treasures were more accessible to all, both physically and intellectually. This involved renovating the Library and Crypt and creating new space within the Crypt for display and interpretation.

The second main aim was to improve the sustainability of the cathedral through increasing the use of these improved spaces for charged exhibitions and venue hire. The final strand was to make the Crypt fully accessible by adding a lift and levelling the floor.

The project cost about £7 million in total, with around £5 million coming from HLF. Over £1 million was raised through grants from other sources such as Colyer-Fergusson, Friends of Rochester Cathedral, Rochester Bridge Trust, Garfield Weston Foundation, Wolfson Foundation, The Headley Trust and the Esmée Fairbairn Foundation.

The cathedral faced rising costs at the beginning of the project due to delays in the tendering process and then the need to re-plan work in the Crypt (see below).

The development works focused on improving four spaces within the cathedral: the Crypt (including the creation of a new exhibition space), Crypt Chapel, Vestry (used for groups such as the Embroiderers’ Guild) and Library. The main project ran from 2013 - 2016. The ongoing works will finish in late 2017.

The Library, located off the South Quire Transept, contains the cathedral’s collection of both modern books and older texts and manuscripts from throughout its history. The work to the Library has repaired the roof, refreshed the interior and floor, and created new storage and display cabinets.

The cathedral worked with the University of Kent to create a digital catalogue system as there was previously no proper catalogue. This will both inform future collection choices and help cathedral staff and other researchers in using the collection. The Library is currently available to researchers through a pre-booking system and the cathedral hopes to broaden access further.

The previously challenging and ill-lit Crypt and Crypt Chapel have been transformed through works to the floor, lighting and (soon to be completed) air management system, as well as the installation of exhibition space. The space is now much more flexible and can be hired for conferences or other events, as well as being used for educational visits and worship.

A new permanent exhibition space has been created within the Crypt, with specially commissioned display cases and new digital interpretation. The focus of the new display is the Textus Roffensis, the Book of Rochester. This unique document dates from 1122 and codifies English laws dating back to 600AD and the first Christian kingdom in Kent. Parts of the collection are also being digitised, with the Textus Roffensis now available online.

The cathedral wanted the Crypt to be fully accessible from the South Quire Transept and to install a lift near the steps at the Crypt entrance. Excavation work uncovered a series of Norman steps, indicating a previously unknown historic entrance to the Quire. Due to the significance of this discovery, the proposed lift could not be installed in the desired position. The cathedral is considering other options for full accessibility, but could not achieve it within the main project.

At the time of writing, work was ongoing to install the Crypt’s air management system through the medieval Gundulf shaft. Due to design issues and prohibitive costs, the original architect’s plan had to be altered. This work was removed from the original project to allow the main refurbishment to the Crypt to be completed. The new Cathedral Architect developed a different solution, for which further permission was sought from and granted by the CFCE. This also necessitated a delay in the fit out of part of the exhibition space.

The Vestry has also been improved to accommodate its multiple uses as a room for music rehearsal and educational purposes, as well as for storage. The Vestry is connected to the Crypt via some stairs and a new platform lift. This lift was also subject to delays due to the discovery of more foundations on the Vestry’s West wall, but this did not prevent the work. The cathedral planned the Vestry fit out and installation of the servery to take place after the major works were completed, and this was ongoing at the time of writing.

The cathedral has worked hard to maintain good working relations with the CFCE based on frequent communication. There were no initial issues with permission; however, there have been lengthy negotiations with the Fabric Advisory Committee over the proposed lift into the Crypt.

The cathedral developed a good relationship with HLF and found them helpful and supportive, particularly in relation to the numerous setbacks and delays. The Cathedral team have found the reporting element of the HLF project to be quite onerous as they are a small team, but understood from the outset that this would be part of the process.

During the project there have been several changes of key senior staff. This led to a blurred overarching vision and confused ideas about the outcomes from the project, including the Activity Plan and marketing of the Crypt space for hire.

The changes also meant unclear lines of responsibility and communication between the project team and cathedral staff. The cathedral recruited an external project team, but as its own staff team is very small, some processes were not robust enough to allow this to work as well as it could have. This led to avoidable stress and unnecessary work as issues were resolved. There was no single internal project manager, which would have ensured that all processes (management, finance) were followed and that there were clear lines of communication and responsibility.

After a period of change, the cathedral now has a stronger staff team from a variety of backgrounds which can offer fresh perspectives on future work and improvements.

There were changes to the cathedral staff team and to architects and surveyors, and issues with some of the original plans. These led to delays and alterations to the project. Coupled with the issues caused by previously undiscovered archaeology, this meant that the cathedral staff and project team spent a lot of time working on alterations to the project, culminating in splitting off certain sections such as the installation of the air-flow system, which had a knock on effect on the opening date of the exhibition space and the full functioning of the Crypt as a venue for hire.

Now that the Library is complete and the final fit out of the Crypt and Vestry nearly complete, the cathedral team will take a step back from further project work to fully understand the benefits of the new spaces, exhibitions and catalogued collections. They are also taking the time to learn lessons from this project relating to project management, forward planning and outcomes.

They are also considering the gaps they need to fill in terms of staff experience. For example, in order to make the most of the potential income stream offered by the new spaces and exhibitions, they need to make sure they have knowledge in how to run this sort of business. 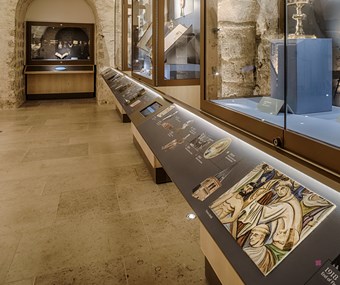 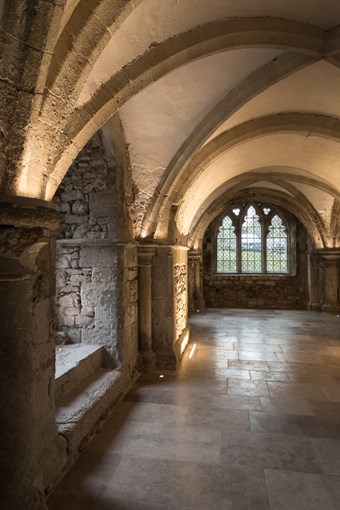 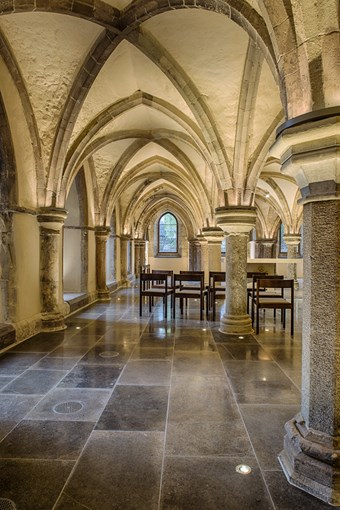 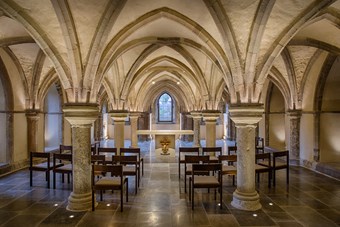 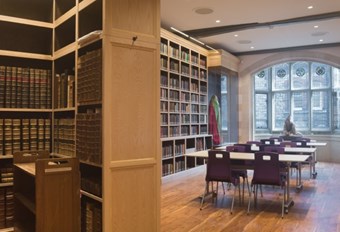 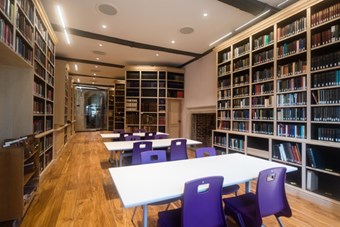 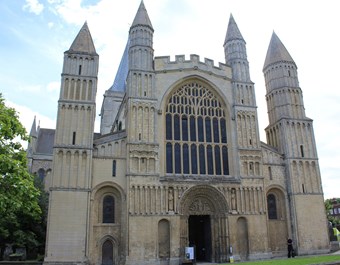 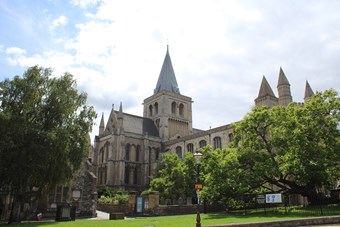 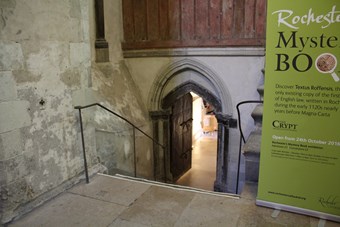 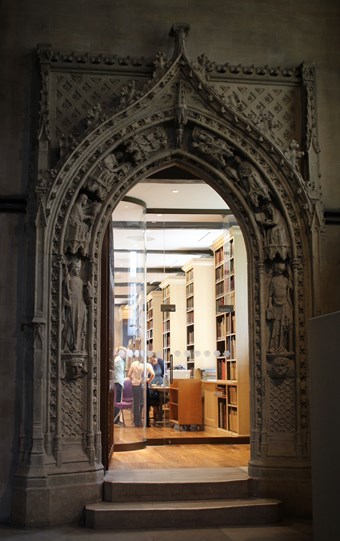 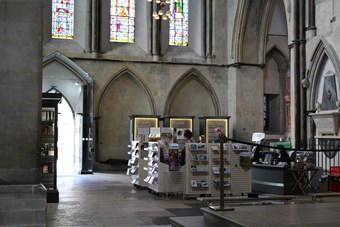