Kings and Scribes: the Birth of a Nation is a large-scale project involving development and conservation work within Winchester Cathedral and the wider estate to protect key areas of heritage at risk and to improve education and exhibition spaces.

Taking on the challenge of sustainability, the cathedral is committed to creating opportunities for long-term planning to make the most of its assets, meet the needs of its community and realise its vision of being a place where people can experience the beauty of holiness.

This five year project (ending in 2019) will have conserved heritage, created new exhibition spaces, and improved learning facilities and interpretation.

Repairs and conservation mean that the cathedral and estate are in a better state, allowing for an improved visitor offer and associated public engagement plan. The cathedral hopes to grow visitor numbers from around 300,000 to 500,000 per year and to increase income generation to become sustainable.

Over the last decade, Winchester Cathedral has adopted the philosophy of the virtuous circle in order to both preserve the cathedral and ensure that building and mission are sustainable for generations.

Kings and Scribes is the first project to enter this cycle, whereby resources are put into conserving and improving areas of heritage at risk and engaging people, which allows the cathedral to make the most of these spaces and generate income from them. Money raised can then be used to begin the cycle again.

The exhibition 'King’s and Scribes: The Birth of a Nation' is now open to the public at the cathedral.

The project team broke Kings and Scribes down into 14 smaller projects: each capital or conservation piece was a long-term investment in itself. Once complete the project will have achieved the following:

The logistics for such a large project, involving the removal, restoration and re-placement of much historic material, have necessitated a lot of preparation work from the project team, Cathedral Architect Nick Cox, Cathedral Archaeologist John Crook and contractors.

For example, the project team has creatively planned the works to the South transept to allow the movement of people and materials in a very compact space.

There have also been challenges during the development works and creation of level access across the new exhibition spaces.

One of the key learning points from a project planning perspective has been that old buildings only gradually reveal their secrets, some of which can present unexpectedly challenging constraints. Original plans and designs do not necessarily map onto final works due to unexpected finds or issues.

The project team had to change the original plan for the lift following excavation work. Records showed a Romanesque pavement under the floor, but by 16.4 metres deep nothing was found. Although this allowed for a more robust lift to be installed, it involved considerable redesign, further permissions and cost.

There has inevitably been an impact on worship due to the level of capital works within the main building. The project team were determined that services and other activities should go on as normal and work was painstakingly planned.

For example, the removal of some external scaffolding was delayed until early 2017 so that it did not interrupt Advent and Christmas worship and activities.

The cathedral was awarded two FWWCCRF grants over the two rounds of the scheme. The cathedral team are very grateful that these allowed them to carry out additional repair and restoration work. The first allowed for extensive lighting and recabling work following a fire caused by faulty wiring in the Lady Chapel. The second was used to conserve and restore the stained glass and surrounding stonework in the North transept, some of which dates to 1380.

The cathedral has had a lot of support from the Friends, the Trust, the Fabric Advisory Committee (FAC) and Cathedral Fabric Commission for England (CFCE).

The scale of the project has meant a lot of negotiating and minor alterations to plans which have required external input, especially from the FAC and CFCE. Despite this, the project has been able to do everything it set out to do.

The cathedral believes the good relationship they developed with HLF case officers and others was very beneficial to the project and allowed for the development of creative solutions. They value the contribution HLF has made to the project as a constructive and critical friend, helping them think outside their comfort zone and, ultimately, making the project stronger.

The cathedral is developing a sustainable income stream through holding more events and activities and trying to encourage people coming to these events to enter the cathedral itself.

In 2016 they held a weekend-long Stonemasonry Festival, which attracted many visitors and around 20 stonemasons competing in their craft. The festival paid for itself as the pieces were auctioned off at the end. The cathedral also holds a Christmas Market which attracts nearly half a million visitors.

The project team have kept people informed about the project through the website and the development update magazine, Illumination. They are aware that there is some weariness among the congregation after several years of works, despite their best efforts to keep people informed and enthused. They are already looking forward to the reaction of the congregation and visitors when they can see the results in 2018/19.

The project team understand the importance of sharing experiences and are very willing to share information with others carrying out similar projects. Over the project they have also been to visit others to see different projects and discuss learning points.

Upskilling staff and filling in any gaps in the knowledge of the cathedral team have been important throughout the project.

The project team have developed a mentoring programme whereby consultants and experts (from fields such as learning, volunteering and estate management) are brought in both to carry out work and to teach staff how to do it so that skills are brought into the staff team.

The cathedral created a project team at the beginning to maintain ownership and direction. Annabelle Boyes, Receiver General and Canon Treasurer, has been Project Director, with authority delegated by Chapter and oversight of a team of more than 15 cathedral staff, consultants, contractors and HLF funded posts.

The cathedral developed, with HLF, an approach to project management which allowed the project team to be in control of the project at all times.

This meant that the cathedral broke the project into blocks and sub-contracted for each block, which involved a lot of work to get the tendering and procurement processes right, but was ultimately the right way forward. They received HLF backing and the process has worked very well. 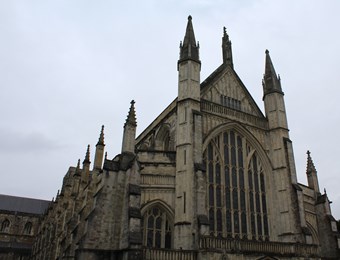 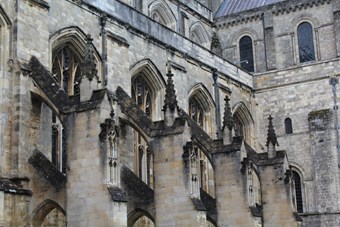 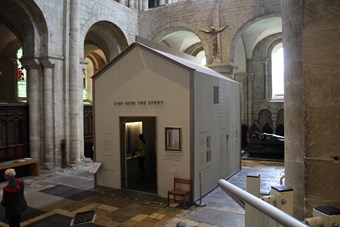 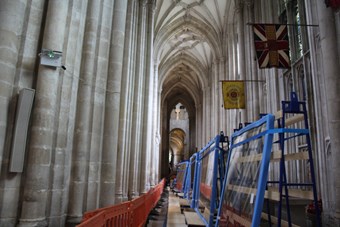 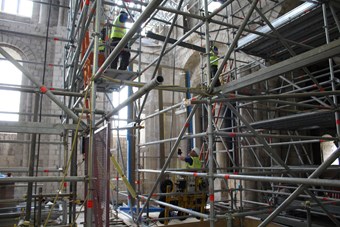 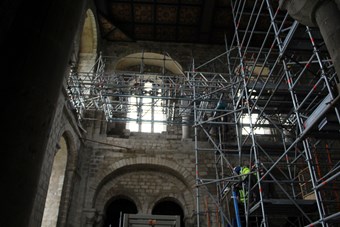 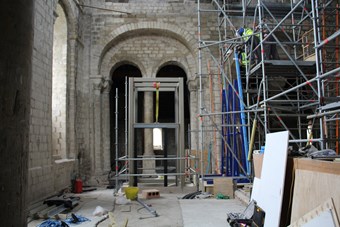 Find out more about King’s and Scribes: The Birth of a Nation

Find out more about Making Changes to Places of Worship