Fittingly for the world’s last surviving grand music hall, Wilton’s has a dramatic past. All its secrets are all laid bare in a restoration that honours its 19th century heyday as a centre of bawdy revelry for dock workers, sailors and others who flocked to London’s port while giving it a new lease of life as a theatre and events space for the 21st century.

Built by John Wilton in 1859 a short walk from the Tower of London, Wilton’s has had several incarnations after starting life as the “Magnificent New Music Hall”, which hosted singing, dancing and carousing for the East End community and visitors to the city. Its rebirth as an arts and theatre spaces is a remarkable comeback for a venue whose existence was under threat for many years.

Tucked behind rows of terraced houses and accessed via a pub, in the early days Wilton’s was a magnet for those working around the docks. There was a fire in 1877, it was rebuilt the following year and served as a Music Hall until 1881. It was then purchased by the Wesleyan Methodist Mission in 1888, which used it to serve meals to the poor.

This was reportedly seen by some at the time as a welcome change of direction after the music hall had become known for fighting, excessive drinking and rowdy behaviour at a time when the East End was mired in poverty.

In 1957 the building functioned as a rag warehouse and by 1964 it was due to be demolished as part of a slum clearance project. A campaign led by the poet John Betjeman succeeded in getting the building a Grade II listing in 1971, but a series of subsequent preservation attempts failed to properly restore the building and bring it back to life. The hall briefly reopened as a theatre and concert hall in 1997 but it soon fell into disrepair and debt. In 2007 the World Monuments Fund added it to the list of “100 most endangered sites”.

Reopening as a theatre

In September 2015 Wilton’s Music Hall finally reopened as a modern theatre, rehearsal and performance space, after the four-year £4m Capital Project supported by the Wilton’s Music Hall charity. The vast vault-like building has been rescued from the at-risk register and revived as a venue so it is once again at the heart of theatre life in London.

The ambitious restoration has succeeded in opening up 40% of the building, which was previously derelict and not in use. Disabled access has been improved and brand new catering and bar facilities added. A dedicated heritage space - the John Wilton room - gives visitors more than a glimpse of its colourful history.

Kate Mullan, Wilton’s Box Office Manager, says an approach of “conservation through repair” has ensured that as much as possible of the historic fabric of the hall has remained intact so future generations can interpret the building for themselves. With a policy of not making changes unless they were absolutely necessary, architects have deliberately left features like rotten pipes and broken fireplaces in place to blend old with new facilities demanded in every modern theatre space.

In retaining these layers of decay and leaving visible its alterations and wear and tear over the centuries, the reopened building has maintained its unique charm and origins as tough place rather than a genteel establishment.
The finished building is a labyrinthine vault with multiple levels, winding staircases and ruined walls that exudes its rowdy history. Capital Works have won four RIBA awards for the project, including London Building of the Year 2016.

Today, Wilton's presents a wide range of artistic work including plays, opera, puppetry, classical music, cabaret, dance and magic shows, as well as an all-year-round education programme of talks, tours and other heritage activities. The building includes a set and props-making workshop, dressing rooms, archive and office space, and is firmly reinstated as a part of the theatre scene, in London and nationally.

Wilton’s remarkable comeback as a multi-space performance venue owes much to the passion and commitment of the staff and volunteers who threw themselves into the project to restore the building, working overtime and adapting to the various demands of the restoration, becoming “like a family” in the process, says Kate Mullan.

Like many a Grande Dame of the theatre, today the venue still wears its heart on its sleeve and exerts a magnetic attraction to everyone who walks through its doors.

The Beonna at All Saints Benington 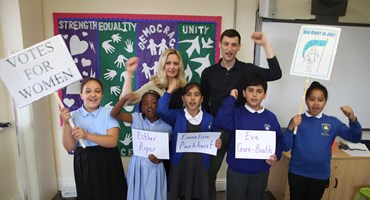 Best Contribution to a Heritage Project by Young People

This award recognises contributions made to heritage projects by young people up to the age of 25.