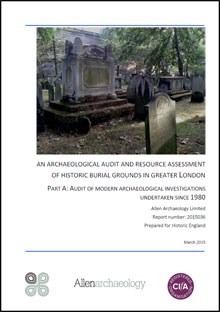 Part A: Audit of Modern Archaeological Investigations Undertaken since 1980

This report outlines the results of a desk-based audit of archaeological interventions which have taken place since 1980 and resulted in the recovery of a sample of more than 100 individuals dated 1066–1900. This forms the first part of a three-stage review of London burial grounds.

A total of 51 sites comprising over 35,000 burials were identified, dating from 1117 to 1940 with a significant bias towards the 18th and 19th centuries. The spatial distribution shows a significant bias towards inner London. Almost half of the excavated burials have been reburied and a third curated. Half of the sites where information was available had been attended by (or cleared by) a commercial exhumation company.

The sample is predominantly Christian and represents high, low and mixed status groups.

Here you can find out about the work and services of the Greater London Archaeology Advisory Service (GLAAS).