Which 'Grateful and United' Tenants Erected a Monument of Thanks to Their Landlord?

To the south of Alnwick town centre, near Alnwick Castle on the North East coast, rises a 25-metre Greek Doric column, guarded by four stone lions. On the west panel at the bottom is the inscription:

To
Hugh, Duke of Northumberland
K.G
This column
is Erected, Dedicated and Inscribed
By a
Grateful and United Tenantry
Anno Domini MDCCCXVI

Erected just a few years after the Battle of Waterloo, the column is symbolic of the profound effect that the war in France had on landowners and their tenants.

For over 700 years, the Percy family has owned a great deal of the land surrounding Alnwick. Hugh Percy, 2nd Duke of Northumberland, had served during the Seven Years War in France and in the American War of Independence. Rising within the British Army's ranks, by 1777 he was a lieutenant general who, despite lifelong poor health, was described as 'honourable and brave, candid and decent, impeccably mannered, and immensely generous with his wealth' - according to historian David Hackett Fischer's research into memories of the duke.

Returning to the Northumberland family seat on his accession to the title in 1786, Percy became known for his direct relationship with his tenants, which included establishing the Percy Tenantry Volunteers in 1798. The local unit was trained over the following years to defend the North East from invasion by Napoleon's army, which the duke considered a distinct possibility.

Percy held twice-weekly meetings with local residents and tradespeople at Alnwick Castle, which bolstered his popularity. Despite his military reputation - he was said to have a terrible temper and had resigned his command during the American war after falling out with General Howe, allegedly over a quantity of hay - the duke's approachable nature was widely respected.

The suspected attack by the French never materialised. In fact, by the turn of the 19th century, farmers across the North East were prospering, due to the high cost of agricultural goods sold to support English troops. Accordingly, when the duke - one of the richest men in England - first increased his rents, doubling or even tripling the amounts, his tenants were able to absorb the cost.

But when peace broke out in 1815, the ensuing agricultural depression affected prices and the farmers were unable to meet Percy's rent increases. However, in an unusual show of 19th century feudal decency, he reduced his rents.

Grateful for this act of mercy, Percy's tenants erected the column in Alnwick in 1816. Also known as 'The Farmers' Folly', it was designed by Newcastle architect David Stephenson. The shallow-fluted column has a foliate cap that supports a drum, atop of which stands the famous Percy lion, with his horizontal tail that, according to local folklore, points towards Scotland - though no one can decisively say why!

A circular granite platform surrounds the column's base, with a stair entrance leading the visitor up to four lions looking out over Alnwick. Poignantly, when the column was built, a sealed glass tube containing a roll of Percy Tenantry Volunteers was buried under the foundations. As a final mark of respect to the duke as military commander, the 5th Regiment of Foot renamed themselves the Northumberland Fusiliers.

Today you can learn more about the Percy family's long history by visiting Alnwick Castle and then wander through town to the Percy Tenantry Column by the railway station. 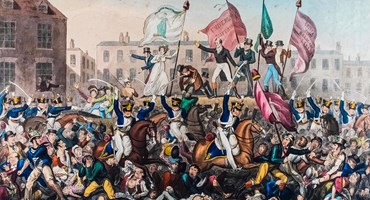 The buildings which house our institutions, as well as places which have witnessed civil movements, or moments of social upheaval and mobility.