In 1970 the UK Gay Liberation Front (GLF) was founded at the London School of Economics.

The GLF initially included gay men and lesbians committed to feminist goals and revolutionary change. By 1971, the GLF was forced to leave the LSE.

Weekly meetings were then held at the Middle Earth nightclub in the cellar of 43 King Street, Covent Garden before moving to All Saint’s parish hall, Notting Hill Gate. Attendees numbered in the hundreds.

The GLF’s earliest protest was against the prosecution of Louis Eakes for alleged importuning at the public toilets on Highbury Fields, north London.

On 27 November 1970 some 150 GLF members held a torchlight rally against police harassment on Highbury Fields. It was the first organised gay rights demonstration in England.

The GLF was known for ‘zaps’, or direct action events. The most famous protested against Mary Whitehouse’s National Festival of Light. This evangelical Christian movement promoted ‘family values’ and lobbied against homosexuality.

At its launch at the Central Hall, Westminster on September 9, 1971, GLF demonstrators undertook a counter-assault called ‘Operation Rupert’. Fifteen GLF groups infiltrated the hall in a coordinated non-violent protest to mock and disrupt the proceedings. Male nuns danced the can-can, and lesbians staged a kiss-in. Others released mice and stink bombs. A girl guide blew bubbles.

In the early 1970s, the GLF held ‘gay days’ and other events across London in locations like Primrose Hill, Victoria Park and Finsbury Park that brought LGBTQ people together. GLF organised England’s first Gay Pride march on 1 July 1972. Two thousand men and women marched down Oxford Street to Hyde Park for a public picnic and visible demonstration of their existence.

By the mid-1970s separate interests and goals created fissures along lines of gender and politics and the GLF soon splintered. Its direct action politics would influence later LGBT activist groups such as OutRage!

In March 1974, 78 Railton Road was squatted by South London Gay Liberation and became the UK’s first gay centre. It offered events such as film screenings, fitness classes, wrestling classes, a knitting circle, weekly Saturday discos and a gay telephone helpline. The South London Gay Liberation Front, the journal Gay Left and the Brixton Faeries all were based at times in buildings in the area.

Railton Road was a place for multiple forms of activism and political affiliation. The National Gay News Defence Committee was originally based at 146 Mayall Road and then 157 Railton Road. Also on Railton Road were two women’s centres, an Anarchist News Service, squatters groups, a claimants’ union for those on benefits, the Brixton Advice Centre and the Icebreakers gay liberation counselling group.

121 Railton Road became the centre of black feminist organising in the area after first being squatted in 1972 by Olive Morris and Liz Obi.

In the 1980s and 1990s, 121 Railton Road became the 121 Centre, an anarchist squat and information centre. Women’s liberation groups, black feminists and other community based groups found a home in Railton Road alongside gay and lesbian groups. Black bisexual artist Pearl Alcock ran a shebeen (bar) on Railton Road.

On 4 July 1982 at St Thomas’s Hospital, London Terrence Higgins was among the first to die from AIDS-related illnesses in the UK. His death inspired friends to found the Terrence Higgins Trust to promote awareness and advocate on behalf of people living with HIV/AIDS.

The HIV/ AIDS epidemic meant that Queer men and their allies started to have a different relationship with specific places related to medical treatment and care.

Particular hospital wards, for example the Broderip at the Middlesex Hospital in Fitzrovia, London, became Queer spaces, generating camaraderie as well as despair.

Family, friends and support workers created networks of care, building organisations and practical structures. The first dedicated AIDS hospices in the UK were the Lighthouse in Ladbroke Grove, and the Mildmay in Shoreditch, in London, followed by the Sussex Beacon on Bevendean Road in Brighton and [still awaiting name] Manchester.

In the 1980s, the Greater London Council (GLC) led by Labour’s Ken Livingstone was instrumental in funding the city’s lesbian and gay community groups. Grants were tied to equal opportunities policies. This helped support the London Gay and Lesbian Centre that opened at 67-69 Cowcross Street in 1985.

The GLC published a Charter for Lesbian and Gay Rights the same year, which was influenced by earlier GLF demands.

In 1988 Section 28 of the Local Government Act barred local authorities from ‘promoting’ homosexuality. The impact was particularly strong on schools, where teachers were forbidden from teaching ‘the acceptability of homosexuality as a pretended family relationship’. LGBTQ people had immediately responded with campaigns against the legislation when it was still a clause in the bill.

Ten thousand demonstrators gathered in London and were followed by an even larger national demonstration in Manchester’s Albert Square in 1988. A ‘Pink Express’ was chartered to bring protesters from London. Campaigning groups in Manchester adopted the slogan and logo ‘Never going Underground’ in opposition to the clause. Section 28 was not repealed in England until 2003. 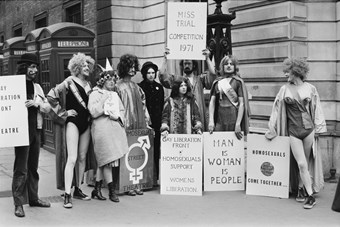 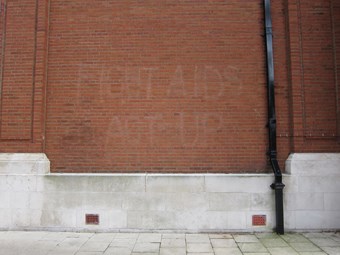 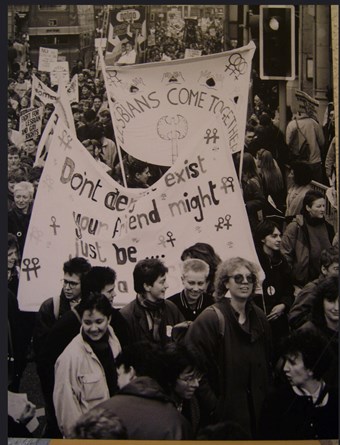 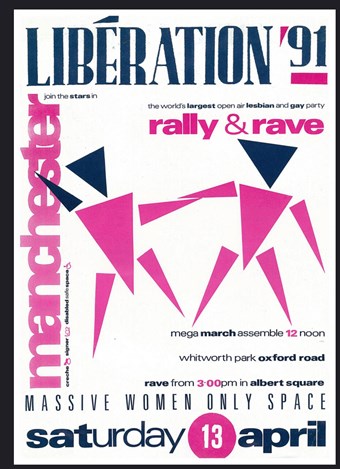 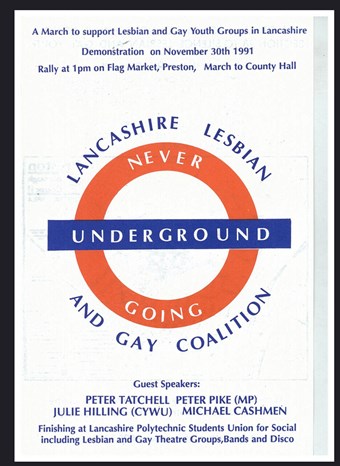 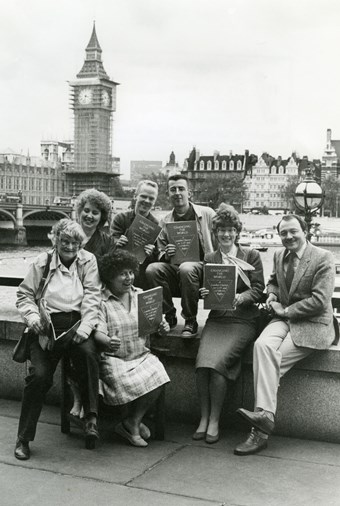 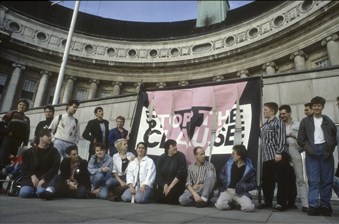 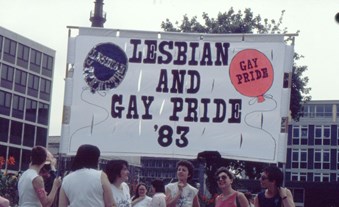