Public spaces have always been considered potential sexual spaces. Many people, men and women, same-sex and different-sex couples, sought what opportunities they could for sex. Spaces away from the watchful eyes of family and neighbours included parks, alleys and derelict buildings.

As early as the 18th century specific places came to have reputations as sites where sodomites, or Queer men, might congregate or where sexual opportunities might be found. The road that connected Upper and Middle Moorfields, London, that today forms the south side of Finsbury Square, was known as the Sodomite’s Walk in the early 18th century because of the men who went there to meet other men.

Across the Thames in south London, Princess Seraphina (John Cooper) attended masquerades as a woman at the Vauxhall Pleasure Gardens in the 1730s (a venue also known for its heterosexual licentiousness). Seraphina enjoyed dancing at the masquerades with men and earned money through prostitution, and by arranging sexual rendezvous between men.

Hampstead Heath in London is known today as one of the most notable gay cruising areas in Europe. From the 19th to mid-20th century, Queer men might pick up guardsmen and other available men, or ‘trade’, for sex in St James’s Park or Hyde Park. But other parts of the city, and every city, had similar areas where men might meet other men.

One visitor recalled that it was a ‘hangover from the days in the 19th century when all Oxford dons were required to be celibate clergymen and all undergraduates male’, adding that:

I would not use the word 'gay' of Parson's Pleasure when I knew it in the early 1970s - even though a lot of the students who used it were affected by the stirrings of gay lib. And even though you could often find a companion to take home with you. It was homo-social. It was a kind of anachronism. I spent many a sunny afternoon there, sometimes studying, sometimes staring at the other men, taking a swim, sometimes chatting with friends.

Russell Square was laid out by landscape designer Humphry Repton in the 17th century. The square’s design created an ‘outdoor room’ with thick plantings around its perimeter. This seclusion made Russell Square a popular cruising area, particularly after the removal of its iron railings during the Second World War.

In 1998, gay rights group OutRage! proposed Russell Square as a ‘zone of toleration’ for gay sex. ‘One third of Russell Square could be sectioned off with a high fence and thick shrubbery’, explained John Beeson of OutRage!. ‘Entrance to the area would be marked with a warning sign. A similar system has worked well in the main parks in Copenhagen and Amsterdam for many years’.

The plan required support from the Metropolitan Police and Camden Council. Complaints, however, were lodged by local residents. Camden Council chose instead to increase lighting, to reduce the square’s thick plantings, and in 2002 to lock the square overnight. 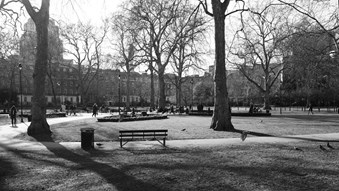 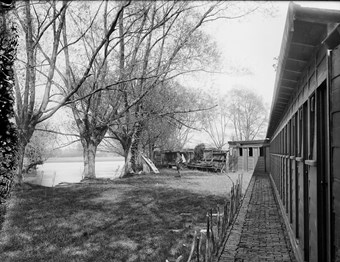 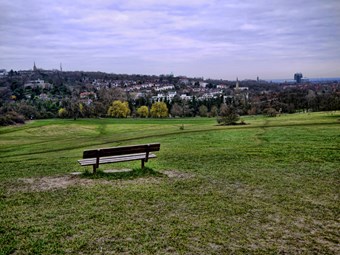 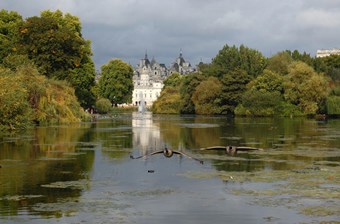 Celebrating places of LGBTQ heritage across England, ranging from the frontiers of Roman Britain to gay pubs and clubs that remain important today.
Pride of Place: England's LGBTQ Heritage
Share this page
Share