In Stoke-on-Trent, home of the pottery industry, the focus will be on regenerating Longton High Street, enhancing the local housing offer and protecting surviving bottle kilns throughout the city.

Longton is the most southerly of the six towns and developed rapidly in the early 1800s due to the expansion of local industries, notably pottery, coal and iron. It is dominated by the large imposing town hall and railway bridge, which give a hint to the history and patronage of the area.

Longton has a tightly packed town centre with a high number of locally listed buildings, many of which are small but very ornate. It also has the largest number of surviving traditional pottery factories in the city.

The need for a Heritage Action Zone

The HAZ will focus on housing within a conservation area by making better use of the heritage value and the historic fabric of Longton. Creative solutions will be sought for residential use in the high street, like reinstating street access through the historic shop-fronts.

The wider economic and social problems facing the town are a direct result of the economic decline of the area, and the decline of the manufacturing and ceramics industries over the past 20 years. Longton town centre has lost major ceramic manufacturers like Aynsley, John Tams, Royal Doulton, Beswick and Shires. These closures resulted in 707 job losses between 2001 and 2009.

Longton's economic decline has precipitated the loss of employment and population from the town, and has turned a once popular area into a significantly underperforming one on every economic measure.

Longton town centre also suffers from a number of negative features, including very limited public realm, poorly maintained buildings and street scene, badly designed replacement shopfronts, the loss of original features such as windows, and poor quality modern infill development. Longton declined further when the A50 road was built in the mid-1990s.

While Longton retains a number of attractive late 19th or early 20th century shopfronts, there are a large number of modern, badly detailed shopfronts which detract from the town's historic character. The main public building, the town hall is unused present, something that the council plans to address in the next 12 months.

And strong community involvement including: 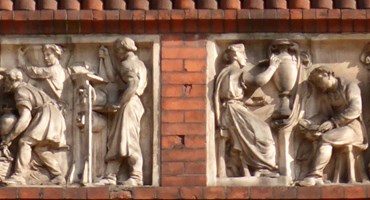 Follow the latest heritage news for the historic environment in the Midlands.