Records are incomplete, but between 7 October 1940 and 6 June 1941 almost 28,000 high explosive bombs and over 400 parachute mines were recorded landing on Greater London. Daylight bombing was abandoned after October 1940 as the Luftwaffe experienced unsustainable losses.

You can see where every bomb fell on London on Bomb Sight's map of the Second World War bomb census.

Ron Doble grew up in London. He became a fire watcher when war was declared in September 1939. Ron remembered the beginning of the Blitz:

Over London itself there were vapour trails, loads and loads of vapour trails, and aircraft way up high, and then a smudge of smoke on the horizon … That was when they first started bombing the docks and they caught fire, several of the granaries and other places along there, which really made a blaze.

The raid by over 500 aircraft against central London on 10–11 May 1941 led to the highest nightly casualty figure. On this one night, over 700 tons of high explosives and more than 80 tons of incendiaries were dropped.

Waiting for the next bomb

Already shivering with cold, I feel that I am going to be sick … the only thing to do is to hold on, though my arms are breaking with cramp, and all the feeling has gone out of my hands, hold on and stand waiting for the next bomb to fall on us.

The Royal family’s London residence Buckingham Palace was attacked several times during the Blitz and was hit by both high explosives and fire bombs.

The grounds were first hit by a delayed action bomb on 8 September 1940. The next day a 500-kilogram delayed action bomb buried itself on the Palace’s North West Terrace. Second Lieutenant G Pringle spent much of the day attempting to dig it out. It exploded at 1.30 am, destroying the swimming pool, breaking the windows and leaving a deep crater in the lawn (Owen, 2011).

According to a report in the Dundee Courier the King spoke to Corporal Victor Le Maitre, one of the men who removed "a time bomb" from the Palace. He asked him if he had volunteered for bomb disposal ('Dundee Courier', 13 May 1941).

More bombs fell on the palace a few days later and further damage was prevented by building a wall of sandbags, six feet high around an unexploded bomb that was lying outside the forecourt gates. When it exploded it left a large crater but only damaged the railings.

Another unexploded bomb was carried out of one of the Palace’s bathrooms and placed under a tree on the lawn by Home Guard Platoon Commander Thomas Williams (Ransted, 2018).

The Palace remained a target. In the summer of 1941, the King visited Hull to see the bomb damage. On being told by a local woman that her windows were all bombed out, he replied: "So are mine at Buckingham Palace" ('Hull Daily Mail', 6 August 1941).

The London Palladium was hit on 10 May 1941 by a parachute mine which lodged in the rafters above the stage but failed to explode.

As it was a mine, a Royal Navy bomb disposal team was called for and Sub Lieutenant Graham Maurice Wright and Able Seaman William Bevan were sent to deal with it.

Climbing a precarious ladder, Wright lashed himself to a beam so he could use both hands to work. He cut through another beam that was obscuring the mine’s fuse, while Bevan held a torch for him.

Wright was able to apply a ‘gag’ that prevented the self-destruct mechanism from activating, but as soon as he touched the fuse it began to whirr. The two men scrambled down on to the stage, and luckily the mine did not detonate.

Although they knew the mine could explode at any time, they returned to it and rendered it safe. Both men were awarded the George Medal for their actions (Ransted, 2018).

To remove the detonator, Wright had to lie on the mine, while Bevan held on to his feet.

Local people saved their own homes and neighbourhood buildings where and when they could.

Ernie Tillbrook was a Fire Guard in Lambeth. He recalled an incident on Kennington Road:

An older man … went out into the middle of the road … and suddenly he was surrounded by incendiaries … he was sort of dancing … He was alright, he got through … Incendiaries hit [the church] but no big bomb … The people, wardens and myself … were able to take all the incendiaries away …[ we] used to cover them with sand … luckily we managed to get them all and save the whole place otherwise like all the other churches around it would have gone up in smoke.

The end of the Blitz

The Blitz effectively ended in June 1941 when Hitler removed his air forces from Western Europe to take part in the invasion of the Soviet Union.

Despite the end of sustained, mass bombing raids, London’s battle against the Luftwaffe was far from over. 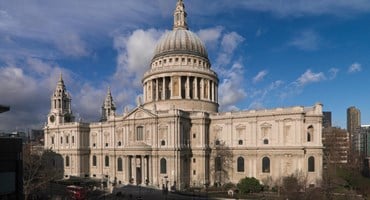 St Paul's is one of London's most loved buildings. Its location on Ludgate hill has been home to a cathedral to St Paul for over 1,400 years.

WWII and the Blitz

The heavy and frequent bombing raids carried out over Britain in 1940 and 1941 began with raids on London on 7 September 1940. 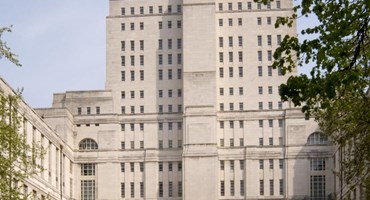 Which Building Was Rumoured to Have Survived the Blitz Because Hitler Coveted it for the Nazis' HQ?

Senate House, the University of London's library and administrative centre, has generated much public debate since its completion in 1937. 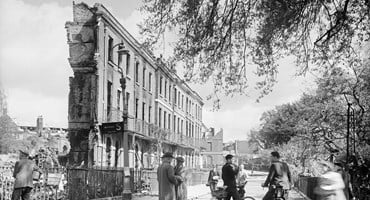 This Exeter building front is all that remains of a terrace of houses. Use this teaching activity to explore life during the Blitz.