Power, Protest and Progress Places to Nominate for 100 Places

This month we’re looking for epicentres of power, protest and progress as part of our search to find the 100 Places that best tell England’s story. As you will see below, the East of England has been a hotbed of activity which could fill a list on its own. Where will you nominate?

Jump to people and places of:

Listen to our 100 places podcasts

The role of Prime Minister as we know it starts with Robert Walpole. Born in Norfolk, Walpole was MP for King’s Lynn. He lived in Houghton Hall and was the first Prime Minister (otherwise known as First Lord of the Treasury) from 1721 to 1742.

The current owner of Houghton Hall is a descendent of Walpole. He’s the 7th Marquess of Cholmondeley and as Lord Great Chamberlain to the Monarch he accompanies the Queen at the State Opening of Parliament each year.

The last Prime Minister to be a member of the House of Lords, rather than the House of Commons as is the custom now, came from Hertfordshire. Robert Gascoyne-Cecil, better known as the 3rd Marquess of Salisbury, was born at the family home, Hatfield House. He was Prime Minister from 1895 to 1902.

Possibly less well-known is that William Pitt the Younger was MP for Cambridge University for most of his two periods in office (1783-1801 and 1804-1806). Having graduated from Pembroke College, he was the youngest Prime Minister ever when he was appointed at the age of 24. At university he became lifelong friends with William Wilberforce, famous for his role in the abolition of slavery.

Another wartime Prime Minister was Winston Churchill, who was MP for Epping (including Harlow) from 1940 to 1945.

Becoming MP for Huntingdon has given the country two leaders and one of the most controversial figures in British history.

In the 17th century, Oliver Cromwell was MP for Huntingdon between 1628-9 then MP for Cambridge from 1640-49. A Parliamentarian (or ‘Roundhead’) in the English Civil War, he was an important commander in the New Model Army.

After the execution of King Charles I, he commanded England’s army in Ireland and in Scotland. In 1653 he dismissed Parliament by force and was invited to rule as 1st Lord Protector of the Commonwealth of England, Scotland and Ireland.

Cromwell was buried in Westminster Abbey. After the restoration of the monarchy, his corpse was exhumed. He was then ceremonially hanged at Tyburn in London before being beheaded. What is believed to be his head is buried in the chapel of Sidney Sussex College, Cambridge, where he was a student.

With six cathedrals, the East also is known for its ecclesiastical power based at:

Boudicca (Boadicea), Queen of the Iceni, led the rebellion against the Roman invasion in 54AD from their East Anglian territory.

The Iceni had been allies of Rome until the death of the King. The treatment of Boudicca and their daughters by the Roman soldiers resulted in an uprising which raised Colchester, London, and St Albans.

In the final battle, the Romans had the upper hand. The resulting massacre meant there was no further mass uprising and relative peace for the next 350 years.

The building of Ely Castle marked the end of the next rebellion. Hereward the Wake led the resistance to the Norman invasion in Cambridgeshire in the years after 1066. He disappeared into the Fens, and mythology, when it became apparent that resistance was futile.

The region was at war again during the Anarchy (1135 - 1153) - when Matilda, daughter and heir of King Henry I, and her cousin Stephen battled for the throne of England. Stephen’s son, Eustace, died pillaging Bury St Edmunds abbey.

Bury St Edmunds also played a key role in Magna Carta. It was here that the Barons of England decided to hold King John to the reforms made by Henry II (Matilda’s son). The most famous clause of the Charter, signed at Runnymede in Berkshire, is Article 39 which guarantees freedom from imprisonment.

No free man shall be seized or imprisoned, or stripped of his rights or possessions, or outlawed or exiled, or deprived of his standing in any way, nor will we proceed with force against him, or send others to do so, except by the lawful judgment of his equals or by the law of the land.

Rebellion continued with rebels from Essex joining in the Peasant’s Revolt of 1381 and the march on London against wage freezes and a new poll tax.

Nearly 200 years later, Robert Ket, a tannery owner in Norfolk, tried to return common land that had been given to private owners. The rebellion was bloodless until the Earl of Warwick’s forces, tasked with ending the rebellion, shot a child. Most of the rebels were killed and Ket was hanged at Norwich Castle.

Thomas Clarkson (1760-1846) was pivotal to the British campaign to end the slave trade and the institution of slavery. Born in Wisbech, he studied at Cambridge University and wrote the 1785 winning Latin prize essay on the topic of 'Is it lawful to enslave the unconsenting?'.

In 1787 he founded with others the Society for Effecting the Abolition of the Slave Trade. He was key in persuading William Wilberforce, a fellow graduate of St John’s College, Cambridge, to represent the cause in Parliament.

Clarkson’s gave evidence to the 1788 Parliamentary committee looking at the slave trade. It included the horrific diagram of the arrangement of slaves below decks on the ship named the ‘Brookes'. After the Foreign Slave Trade Abolition Act in 1807, Clarkson campaigned for the abolition of slavery itself. A founder member of the Anti-Slavery Society in 1823, his work was instrumental in seeing the Slavery Abolition Act passed in 1833. Clarkson died at his home, Playford Hallin Suffolk in 1846.

Olaudah Equiano was a slave in Virginia when he was sold to a Royal Naval officer. Whilst at sea he was baptised and learned to read and write. After being sold on, he managed to earn money by trading on the side and saved enough money to buy his freedom.

After travelling the world, he became involved in the abolition movement in London. He published his autobiography in 1789 - one of the earliest books by a black African writer. In 1792 he married Susanna Cullen in St Andrew’s Church, Soham, Cambridgeshire. They had two daughters and he died in 1797. 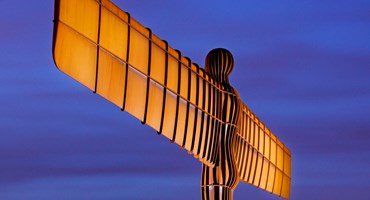 A History of England in 100 Places

Discover the 100 historic places which have shaped England and the world beyond. Find out more with a podcast and a book exploring all 100 places. 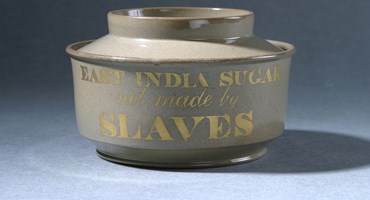 Here you can read about the abolition movement, the legal cases and the actions that marked its progress and the legacy of the slave trade.