Post-War Council Housing Estates: The Planners' Dream of The Future

On 1 August the Housing Act of 1930 was given royal assent. This single act led to the clearance of more slums than at any time previously, paving the way for the creation of many post-war council housing estates.

The act was known as the Greenwood Act after the MP Arthur Greenwood who steered it through parliament. It obliged local councils to clear all remaining slum housing, and provided further subsidies to re-house inhabitants. On the Greenwood Act's 90th anniversary we look at the way it changed public housing provision.

Although the intentions of the 1930 Housing Act were to improve living conditions for the poorest households, the urban renewal strategy of slum clearances was a controversial one. Critics argued that often the housing built to replace demolished streets was too expensive for many tenants to rent.

However, what could not be disputed was the improvement in facilities the new housing estates offered to people who had previously lived in the back to back terraces, namely indoor toilets, central heating and damp-free conditions.

Post-war council estates were also an experiment in planning design. Many were built on greenfield sites that were miles from the nearest city centre so shops, pubs and clubs, and even churches, were all included in the layout.

One such estate in Leicester, New Parks, originally formed part of the large section of Leicester Forest known as the Frith. In 1897 the Leicester Corporation had bought some 183 acres in the south-west from private owners for use as a public park. Over several years from 1933 it bought most of the remainder.

By 1956 New Parks was almost entirely covered by the modern housing estate owned by Leicester Corporation. The estate consists predominantly of two-storied houses, but large blocks of flats were built on Aikman Avenue in a distinctive formation when seen from the air.

Near to the flats is St Aidan’s Church, which was designed by Sir Basil Spence who also designed the new Coventry Cathedral. The flats have been refurbished over the years but the exterior remains the same, as does St Aidan’s, which opened its doors in 1959.

Moving on up: Clifton Estate, Nottingham

While planners included amenities in the overall schemes, for some estates the promised shops and entertainment were not built on the same timeline as the houses and residents had to wait years for them. However, with an acute shortage of post-war housing, planners were keen to get the homes built first.

This was the case for the Clifton estate in Nottingham. In 1950, the year the Minister of Housing and Local Government granted planning permission for the development, the average wait for council housing in Nottingham was five years.

I jumped for joy. I thought it was beautiful. It was a mud bath but I didn’t care. We had our first house of our own.

The estate was built over a period of 18 years and at one point it was the largest in Europe. By the time the last block of flats was built in 1968 it was home to over 40,000 people. Because of the city’s housing shortage, speed was of the essence and so new building methods were devised, including constructing houses by pouring a mixture of aggregate, water and cement into timber moulds. 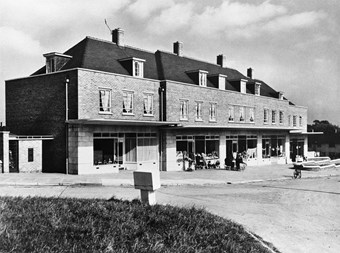 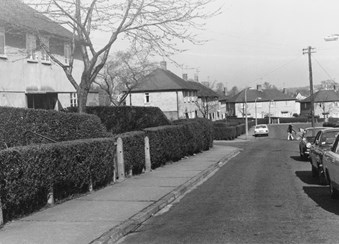 As with the Clifton estate, Chelmsley Wood was built upon acres of green space to the east of Birmingham that was known as Bluebell Woods. Despite strong objections being raised by various Parish Councils, planning permission was granted for the development and work started in 1966. It was completed in 1970.

The estate's design brief was the separation of cars and pedestrians in a planning style known as the 'Radburn layout', which itself was an American off-shoot of the English garden city concept. Walt Disney was influenced by the Radburn layout. It was said to have inspired his vision for building a company town, which was never finished but elements of it are incorporated into the Epcot site at Disney World. 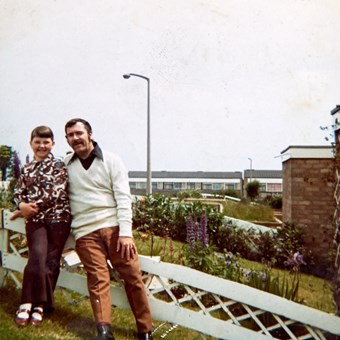 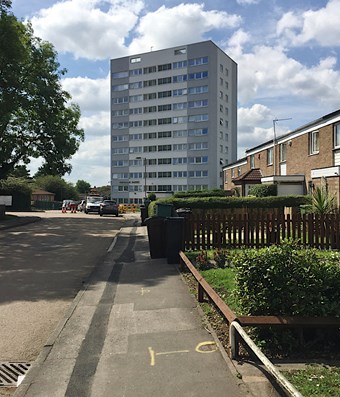 One of the attractions of moving to Chelmsley Wood was the amount of green space.

The houses all had front and rear gardens, and the separation of houses from main roads meant that children could play with relative safety outdoors. Even around the tower blocks there were areas of greenery for children to play on.

The estate retained parts of wooded areas, including Meriden Park and Alcott Wood near to where the Grade II Alcott Hall still stands.

Although the estate, as with many similar areas, has social issues, it has also elected three Green Party councillors, and there are numerous grassroots community organisations such as the Gro Organic group that are working towards environmental urban regeneration.

In the city: Curtis Gardens, Birmingham

Not all post-war council estates were built on the city edges on former green belt. There are examples of small-scale development on cleared sites, with Birmingham City Council making great use of brownfield land.

One of the notable features of this urban planning was the commissioning of public art to sit within the new estates.

Lauded as a 1960s' time capsule, one of the city's developments is Curtis Gardens in Acocks Green. The small estate, which consisted of three 12-storey apartment buildings and houses that were meant to provide accommodation for elderly residents, was built in 1964 following years of campaigning by Labour party activist John Curtis. 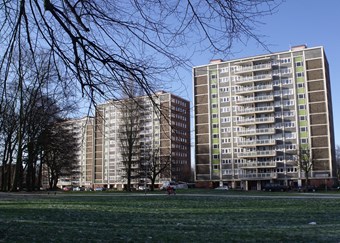 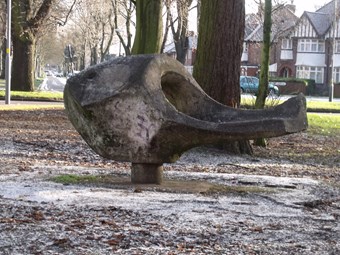 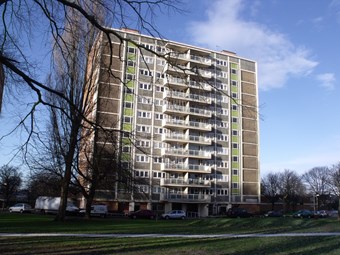 The site, which was bought by the council in 1925, was cleared of allotments and also the ruins of what had once been Fox Hollies Hall. The hall had been part of the sale but like many grand houses taken on by municipalities, there was never any money for its upkeep. The gates to the hall were retained, and although they were later knocked down by a council van, they were then replaced with replicas.

Play facilities for children were designed into the Curtis Gardens development and the sculptor John Bridgeman was commissioned by landscape designer Mary Frances Mitchell to create a piece of artwork. Known simply as 'Play Sculpture', the fish-like piece is listed Grade II and is a rare example of a play sculpture surviving in its original location.

Between 1959 and the mid-1960s Mitchell commissioned Bridgeman to create several sculptures for city estates, but sadly they are all lost.