Hadrian’s Wall Roman Fort Given to the Nation

Carrawburgh Fort, a Roman fort on Hadrian’s Wall, has joined Stonehenge, Tynemouth Priory and Belsay Hall in the National Heritage Collection following a generous gift by a Northumberland landowner.

Carrawburgh Roman Fort is one of 16 forts along the 73-mile long Hadrian’s Wall. Added to the Wall, which was built around 122AD, the fort housed a garrison of approximately 500 soldiers. They were responsible for defending the frontier of the Roman Empire from the tribes to the north.

Carrawburgh sits between the Roman cavalry fort at Chesters and the infantry outpost at Housesteads. Nearby stands the Roman temple to the god Mithras, built by the soldiers based at Carrawburgh.

The fort’s surviving structures lie below ground. In comparison with other sites on Hadrian’s Wall, the fort has undergone very little archaeological investigation so many of its stories remain untold.

Carrawburgh had been cared for by Jennifer Du Cane’s family since 1950 but she recently decided to donate the site to the nation.

It has been a great privilege, but also a serious responsibility, to own Carrawburgh Roman Fort. The time has come to pass on this amazing site as a gift to the nation.

Legal ownership of Carrawburgh has now transferred to Historic England. It will be cared for by English Heritage as part of the National Heritage Collection. This is a collection of historic sites that together tell the story of England.

We are enormously grateful for this generous gift. Hadrian’s Wall is one of England’s most important historic sites and Carrawburgh makes a really valuable addition to our National Collection of historic properties. The fort represents a key part of the Roman frontier and is of outstanding archaeological significance. It has the potential to contribute significantly to our knowledge of the Roman Empire and to visitor enjoyment of the Wall. 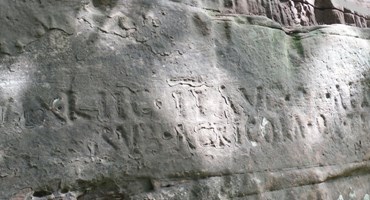 Roman Graffiti to be Recorded at Hadrian’s Wall Quarry

An exciting project to record rare Roman quarry inscriptions in Gelt Forest near Brampton in Cumbria.

Chesters Roman Fort has one of the best preserved Roman bathhouses in Britain which shows the various ways in which Roman soldiers kept clean centuries ago.