Skip to main content
Share this page
Share
AT RISK: Beckford's Tower, Bath. Beckford’s Tower is a much-loved landmark in Bath. Standing at 120 feet the tower is exposed to increasingly severe weather and water is getting into the building © Tom Burrows Media/Beckford's Tower and Museum

Heritage at Risk in the South West Revealed

Over the last year 62 historic buildings and sites have been saved. Imaginative uses have been found for empty buildings, providing new homes, shops, offices and cultural venues for the local community to enjoy.

Monuments in our landscapes have been lovingly cared for, often by dedicated teams of volunteers. Communities up and down the country have celebrated the things that make their conservation areas special and saved valued historic places for future generations.

Historic England’s Heritage at Risk Register gives an annual snapshot of the condition of some of the region’s most important historic buildings, sites, monuments and places. Across the region 62 sites have been removed from the Register because their future has been secured, often by community intervention, while 48 sites have been added to the Register because of concerns about their condition including 149 places of worship. Over the past year, Historic England has offered £1.5 million in grants to help some of the region’s best loved and most important historic sites.

The Heritage at Risk Register 2019 reveals that in the South West, 195 Grade I and II* buildings, 1,048 scheduled monuments, 149 places of worship, 17 registered parks and gardens and 26 conservation areas are at risk of neglect, decay or inappropriate change. There are 1,435 assets on the Register in the South West region, 20 fewer than in 2018.

What's at risk near you?

Find Heritage at Risk on an interactive map. Move around the map to see what's at risk in your area or use the address search.

Explore the Heritage at Risk map

Sites saved in the past year 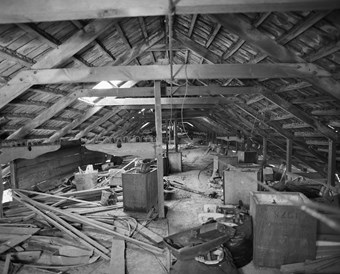 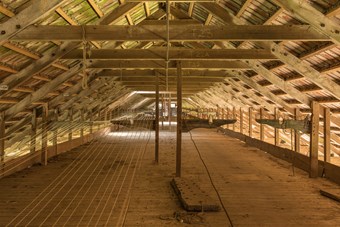 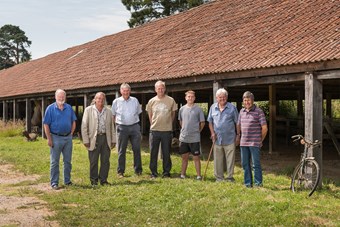 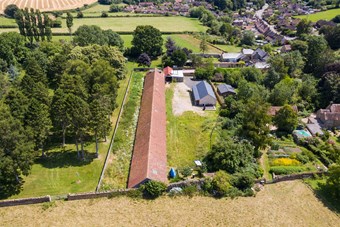 Successfully repaired through the efforts of local people passionate about their industrial heritage, the former rope and twine works in West Coker is now open to the public as a working example of one of rural Somerset’s key historic industries, and the only working rural Victorian twine works in England.

Grade II* Dawes Twine Works is a rare survival. It is a substantially intact late 19th century rural twine works which retains most of its original machinery, fixtures and fittings. Twine was originally produced in the open until the introduction of steam power and covered walks like this one from the mid-1800s. The first floor and attic of the 90-metre-long building were used for laying out yarn and twisting the twine. Its ground floor was open-sided to help dry and finish the twine.

In 2001, local people concerned about the deterioration of the former works, which closed in 1968 and was left vacant, set up the Coker Rope and Sail Trust. With funding from a range of supporters including the National Lottery Heritage Fund, Andrew Lloyd Webber Foundation, the Prince’s Fund, Sainsbury’s, and Arts Council England, they worked tirelessly to secure the fragile historic structure and its precious machinery for future generations. With repairs and conservation complete, the final project was to build a new visitor centre and community space. After £1.3 million had been raised and invested, the new centre welcomed its first visitors in March 2019.

Get news and visitor details

With its tall shingled spire, the tower of Westbury parish church is a much-loved landmark that has overlooked the Severn estuary for centuries. The stone tower, which is detached from the church building, dates from about 1270 and may have been originally built as a garrison or fortified tower. The unusual timber-framed spire was added in the early-14th century and is believed to be the second highest timber framed spire in the South West, after Salisbury Cathedral.

In 2016 repairs to the spire began, funded principally by the National Lottery Heritage Fund and Historic England. Thanks to the support of the local community and a dedicated team of volunteers, the repairs to Westbury Spire were successfully completed in May 2019. The tower was opened for tours in September 2019 as part of Heritage Open Days, and over 300 people viewed the elaborate wooden structure of the spire.

Affectionately known locally as Bristol’s cathedral of the East, Grade II* listed Holy Trinity Church was built in 1829 to serve the rapidly expanding parish of St Phillips and St James. It was financed by the proceeds of Waterloo when in 1818 Parliament granted £1 million to build new churches across the country.

Deconsecrated in 1976, Trinity continues to serve its local community but now as a thriving arts centre. Trinity's current managers Trinity Community Arts, along with the support of Historic England, the National Lottery Heritage Fund and other funders have invested over £2 million conserving, repairing and restoring the building.

Find events at the Trinity Centre 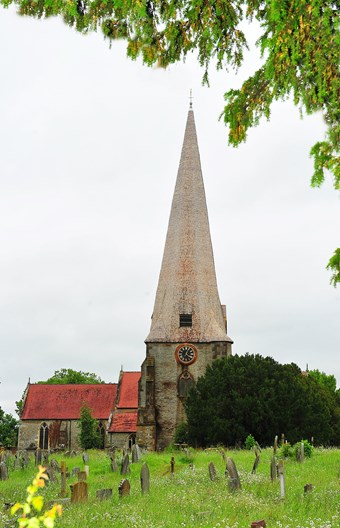 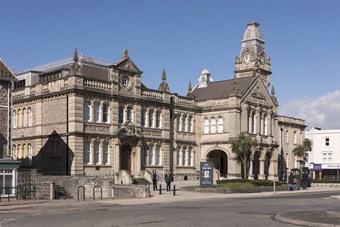 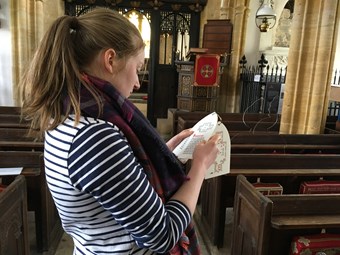 In 2018 North Somerset Council reviewed the conservation areas in Weston-super-Mare as part of the Great Weston Heritage Action Zone. Following extensive public consultation the Council adopted a new, single conservation area incorporating all the previous conservation areas, plus an extension to include Weston town centre.

The Council have an action plan in place to improve the conservation area, which in turn supports Weston’s wider regeneration. It includes a project to improve town centre shopfronts, which is now getting under way.

In April 2017, Grade I listed Low Ham Church in Somerset came into the care of the Churches Conservation Trust (CCT), the national charity protecting historic churches at risk. Built in 1620 by Sir Edward Hext and his wife Dionis, Low Ham is a rare example of a 17th-century church which has remained relatively unchanged. In 1645, the church suffered damage during the Battle of Langport, one of the most significant conflicts of the Civil War, which resulted in the Parliamentarians taking control of the West of England.

Since vesting, CCT has spent £325,000 on urgent conservation and repairs. This work included work to secure high level stonework, a complete drainage overhaul to remedy damp problems, detailed stained glass repairs and plastering and redecoration. The church is now open to visitors, who can enjoy new interpretation displays about the church.

Sites where good progress has been made

Following years of decay, a bright future now beckons for the iconic Assize Court building that is so familiar to the people of Devizes. Thanks to support from the Wiltshire Historic Buildings Trust, Wiltshire Council, Historic England and a generous local benefactor, the newly-formed Devizes Assize Court Trust has now acquired the building, taking a major step towards its rescue.

The plan is that the Assize Courts will become the new home of the Wiltshire Museum, with purpose-built galleries, a café, a lecture theatre and other community spaces. Once back in public use the building will make a valuable contribution to the cultural and economic life of the town.

Originally funded by public subscription, the Assize Court building with its imposing Grecian style facade was designed in 1836 by local architect T H Wyatt. The courts closed in the 1980s and although plans were drawn up to convert the building, none were economically viable, and the condition of the building continued to deteriorate. New professional advice has confirmed that the Assize Court can be saved and reused, and a programme of urgent works is now underway as a first step towards its exciting new future.

The late medieval market cross in the centre of Castle Combe, sheltered beneath a later roof, is currently being repaired. The cross has remained in its original position at the meeting point of three roads into the village for seven centuries, having been built when Castle Combe was an important and wealthy settlement based around the local cloth industry. This unusually fine and well-preserved market cross is a Scheduled Monument and much loved by the local community. The parish council have tapped into that local enthusiasm and garnered support for repairs which got under way this summer. Historic England have also helped fund the project.

Sites added to the Heritage at Risk Register 2019 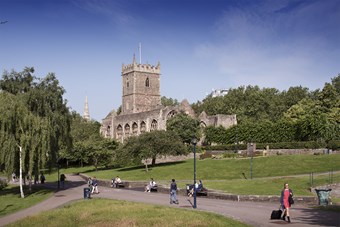 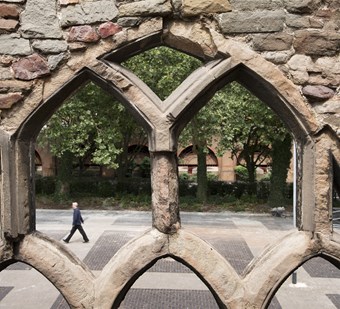 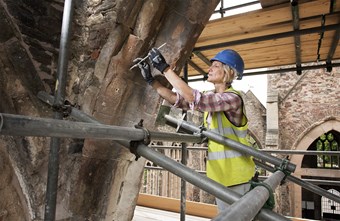 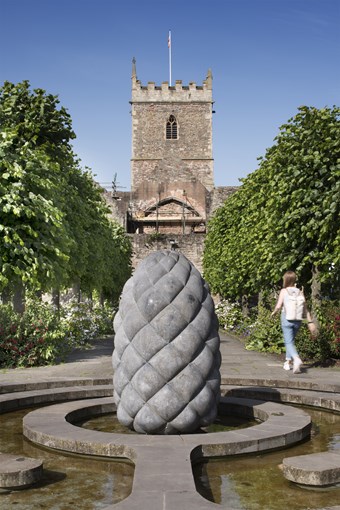 St Peter's is a large 15th century church which was damaged and reduced to a roofless shell in the first bombing raid on Bristol in November 1940. Its ruins are maintained by the City Council as a memorial to the civilian dead of World War II in Castle Park, an open space created following the area’s destruction in the Bristol Blitz.

Grade II* listed St Peter’s – thought to be on the site of Bristol’s earliest church – is being added to the Register as high level stonework is deteriorating and large areas of internal paving need attention.

Some emergency works are taking place to start securing its most vulnerable areas. There is an aspiration to increase public access to and understanding of the building’s story, whilst respecting its religious and spiritual significance.

Beckford’s Tower is a much-loved landmark in Bath. Standing at 120 feet and enjoying panoramic views over the city, the early-19th-century tower is exposed to increasingly severe weather and water is getting into the building.

It was built in 1827 for writer William Beckford (1760-1844) the author of the Gothic novel Vathek. Designed to house Beckford’s collection of art, books and furniture, the tower was also a retreat, an observatory, and a vantage point from which to view the city of Bath. Beckford was finally laid to rest here when the grounds were consecrated for burials. Lansdown Cemetery, this integral part of Beckford’s estate in Bath, is now a registered historic park and garden. It is also being placed on the Heritage at Risk Register this year as some of its principal features, including the Grotto Tunnel, are in poor condition.

The Bath Preservation Trust acquired Beckford’s Tower in 1993 and carried out extensive repairs, opening the building to the public in 2001. The Trust is now preparing for another phase of major repairs and fundraising is underway.

Get visitor details for Beckford's Tower

…are at risk of neglect, decay or inappropriate change.

You can visit any of the hundreds of historic properties across England that we have grant-aided.