A new light installation has gone on display at the world’s oldest iron-framed building, the Grade I listed Main Mill at Shrewsbury Flaxmill Maltings. Visible from the street, ‘As Shadows Return’ uses silhouettes behind the windows to show workers and machinery inside the mill.

Dating back to 1797, the building operated as a flax mill until 1886 and then as a maltings from 1897 to 1987. It was also a temporary barracks during the Second World War. Its iron frame was truly pioneering, the work of British engineers who were determined to overcome the problem of timber-framed mills and factories being destroyed when fires broke out. The design gave birth to the modern skyscraper.

The installation marks the completion of the first phase of the £28m restoration at the mill, funded by the Heritage Lottery Fund, Historic England, Shropshire Council and the Friends of the Flaxmill Maltings. Work involved stabilising the building’s structure, replacing the roof and unblocking two thirds of the windows. Scaffolding that covered the mill has recently been taken away to reveal the building’s exterior which has not been seen for more than a decade.

Commissioned by Historic England and created by Shrewsbury-based and world-renowned light artist Andy McKeown, the temporary illumination will continue to light up the mill until 31 January. The lights will be switched on every day from sunset until late and the free installation will continually change for those who would like to go and see it more than once.

‘Dragon on the hill’

The flax mill used to be referred to as the ‘dragon on the hill’ because of the glow of light and noise of the machinery. It was the largest employer in Shrewsbury and at its peak more than 800 people worked at the mill, including children. An apprentice house was built on the site in 1811 to house them, just metres away from the Main Mill where they spent long hours in terrible conditions.

Creating a centre of innovation

The restoration of the Grade I listed Main Mill and the adjacent Grade II Kiln is creating a new learning and enterprise quarter for Shrewsbury. The work is expected to be completed in 2021.

The buildings are being transformed into high quality offices for the region’s growing creative industries and small business start-ups, to help drive the town’s renaissance as a regional economic hub. A new interpretation space and café are also features of the new design, allowing members of the public to come and enjoy Shrewsbury Flaxmill Maltings and to learn more about its unique place in history.

For the duration of the installation, information will be made available about people who worked at Shrewsbury Flaxmill Maltings throughout its history on Historic England’s social media channels.

Find out more about the installation

To find out more about the history of Shrewsbury Flaxmill Maltings, the Visitor Centre is open on Saturdays from 10am – 4pm, Spring Gardens, Shrewsbury, SY1 2SY.

This installation captures the building’s incredible history and the stories of the people who worked there. From its innovative design to the arduous working conditions, including those of the children who lived in the Apprentice House, the mill has a complicated past. ‘As Shadows Return’ is a dynamic and evolving piece, to take local people and visitors on a journey through its history.

As Shadows Return will be my 10th light installation at the Flaxmill. A delicate mix of shadows and light that awaken slowly and evolve throughout the six week run. The installation celebrates the return of the windows flooding the interior with light and releasing the shadows. Look to the building each evening from sunset and you may glimpse shadowy reflections of past activity.

Andy McKeown has a history of lighting up the Flaxmill and it’s fantastic to see him back here to mark this major milestone in the restoration project. Andy’s installations are well known for their innovation, just as the people who built the Flaxmill were, so it is fitting that he has created this wonderful piece for the local community to see and enjoy.

Alan Mosley, Chair of the Friends of the Flaxmill Maltings

It is uplifting to see the progress that has been made so far at Shrewsbury Flaxmill Maltings, and for these achievements to be celebrated in such a creative way. Although there is still a long way to go before it is complete, witnessing the Flaxmill’s journey from dereliction to being a part of Shrewsbury’s economy once again is exciting. I look forward to seeing the developments that the next phase of construction works will bring.

Restoration Milestone Reached for ‘Most Important Building of the Modern Age’

Restoration of the roof completed on the 1797 Grade I listed Main Mill at Shrewsbury Flaxmill Maltings. 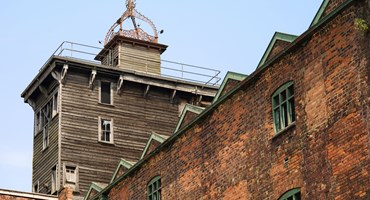 Current visitor information and future plans for Shrewsbury Flaxmill Maltings. This forerunner of the modern sky scraper is open and free to visit. 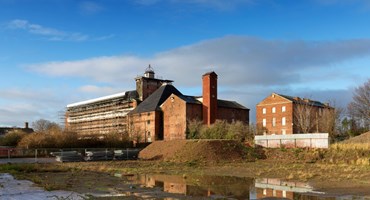 We're responsible for a fundraising campaign to help us complete the restoration of the Grade I Main Mill and the Grade II Kiln.