11 pubs have received listings updates and upgrades as part of a listing project to protect rare historic interiors.

Explore a map of the listed pubs

The Philharmonic Dining Rooms, Liverpool, has been upgraded to Grade I by the Department for Digital, Culture, Media and Sport on the advice of Historic England, making it the first purpose-built, Victorian public house to receive a Grade I listing.

Regarded as a ‘cathedral among pubs’ for its opulence, the Philharmonic was one of the most spectacular pubs to be completed at the end of the 19th century, known as the ‘golden age’ of pub building. It now joins the top 2.5% of protected historic buildings in England such as Buckingham Palace, Chatsworth House and Liverpool’s Anglican Cathedral Church of Christ in gaining the highest listed status.

The list of pubs was proposed by the Campaign for Real Ale (CAMRA) Pub Heritage Group, part of an on-going collaboration between Historic England and CAMRA to protect historic pubs and their interiors.

English pubs are some of our best-loved community buildings and are often threatened with closure so we are delighted to see 11 historic pubs receiving further protection. We are proud that the Liverpool Philharmonic pub, a remarkable survival from the Victorian era, has been given a Grade I listing which will help maintain and preserve its outstanding interior fittings and exterior fabric for the future. The 11 pubs range from the opulent Philharmonic in Liverpool and the picturesque Rose and Crown in Somerset, to a London pub with links to Bartholomew Fair. All of them fully deserve the protection given by listing

So few of England's 40,500 pubs retain interiors which have not suffered major alterations over the years. CAMRA has identified 280 pubs whose interiors it considers to be of national historic importance, and we feel it is vital for these precious survivors to be preserved for future generations to enjoy. The majority of these pubs are listed and the new detailed listing descriptions will enhance their protected status and give the public more information about the delights they contain.

For centuries, the local pub has been a place for people to come together. The 11 protected today are each original and important in their own way, and their updated listings will help to protect their cultural and historical heritage for years to come.

The Philharmonic Dining Rooms is a public house built from 1898-1900 by the Liverpudlian architect Walter W Thomas. Built in an exuberant free style, this iconic building is a striking example of Victorian architecture in the city centre, which was first Grade II* listed in 1966.

The three storey building has been reassessed and upgraded to Grade I for its outstanding architectural quality and magnificent interior.

The exterior features elaborate carvings, Art Nouveau elements including metal gates by the architect and designer Henry Bloomfield Bare, and stone sculptures of musicians and musical instruments in low relief. 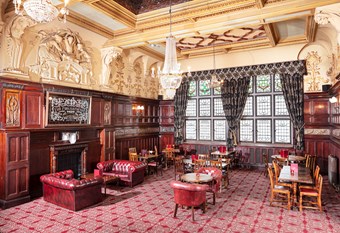 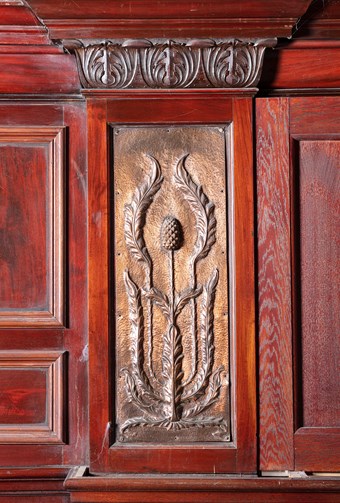 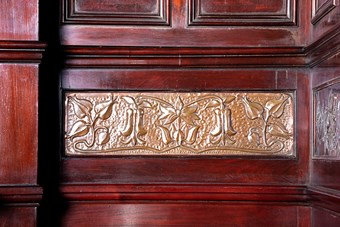 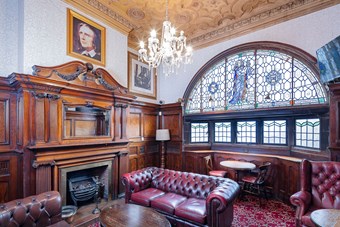 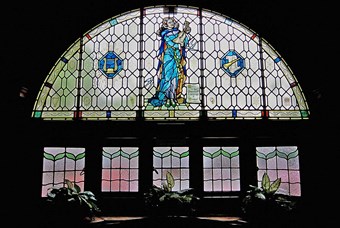 Two Grade II* and eight Grade II listed pubs from across the country have had their listings updated to include further information about their historic interiors.

Built in 1907, The Vines’ upmarket, Edwardian interior is opulent and decorative, featuring rich, original mahogany woodwork and plasterwork, and a large stained-glass dome in the former billiards room. The separate lounge bar, public bar and smoke room survive well, as do a number of striking fireplaces.

Peter Kavanagh’s (Egerton Street) – an eccentric and much-loved Grade II listed pub that was re-designed by its landlord and inventor of the same name, includes various unique features including carved ‘corbels’ (wall brackets) thought to be caricatures of the pub's regulars, and original tables designed by Kavanagh, with channels for spilt drinks and in-built ash trays.

Originally listed as 18th century or earlier, the revised entry for the Grade II listed Blue Ship (The Haven, Billingshurst) shows that it was originally a 16th century cottage that was converted into a pub in the 1850s, and subsequently remodelled and expanded later in the century.

It serves as a good example of how modest vernacular buildings were converted into licensed public houses following the 1830 Beer Act. The Blue Ship is one of only eight pubs in the UK known to have no bar counter. The updated listing now refers to the pub’s rare, still-surviving tap room ‘servery’ arrangement from the 1850s.

Two important London pubs from the Victorian era have had their listings updated to include information about their interiors. The Grade II listed, mid-19th century Hand and Shears (Middle Street, Smithfield) retains its public, saloon and private bars, and has a range of intact late 19th century fittings.

The pub also has important historic links; to Bartholomew Fair, one of England’s most important medieval fairs, and its “Pye Poudre Court” - a court of medieval original convened at the pub to keep order and settle merchants’ disputes.

The Grade II listed Coach and Horses (Greek Street, Soho) is famously associated with a regular cast of prominent writers, artists, musicians and actors, including Francis Bacon, Lucien Freud, Peter O’Toole and John Hurt, and as a meeting place for The Spectator and Private Eye magazines.

The pub’s famously debauched atmosphere was captured in Keith Waterhouse’s 1989 play ‘Jeffrey Bernard is Unwell’, in which its interior was faithfully recreated for the stage of the nearby Apollo Theatre.

The pub’s listing now includes reference to this recent history, as well as to its historic origins as an early 18th century pub of the same name. The present building dates from the 1840s but had its unusual cast-iron columns added in 1889. The interior was remodelled in the 1930s by Taylor, Walker & Co and this survives remarkably well, with bar fittings, signage and the partition screens all retained.

A historic pub sitting in the centre of Salisbury, Wiltshire, the Grade II* listed Haunch of Venison is a well-preserved building dating from the 15th century, though there is evidence of a pub of the same name at the site since the 1300s.

The building retains clear evidence of its evolution from a church house in the 1400s into a public house, and it was refurbished in around 1909. It has its traditional layout of divided drinking spaces, with a small ladies snug, and still contains fittings from its 1909 refurbishment including a rare and elaborate bank of spirit pumps.

Grade II listed Square and Compass (Worth Matravers, Dorset) is an 18th century pub with 19th century extensions. The layout and arrangements, without a bar counter, and with serving hatches from the rear ‘servery’, is now a rare survival, and adds to the building’s claims to special interest.

Two Somerset pubs have had their listings updated to reflect their important interiors. The distinctive and picturesque Grade II listed Rose and Crown (Huish Episcopi) dates from around 1800.

Without a bar counter, it instead has a ‘servery’ area customers can walk into containing shelves and hand pumps. This pub was also refitted in the interwar period and retains various features from that time.

Earlier fabric survives too, including flag-stone floors, timber joinery and the fireplace. Attached to the rear is a 19th century skittle alley – a relatively common feature in Somerset, though rare nationally.

Grade II listed Tucker’s Grave Inn (Radstock) is a pub thought to be named after the burial site of local farm worker Edward Tucker, who in 1747 is reputed to have taken his life and, according to contemporary practise, was buried at a crossroads nearby.

Originally an 18th century cottage, it was licensed as a pub by the early 1800s. It has no bar counter, the casks of beer and cider being stacked below the window of the central public bar. It also has hand-painted signage to the tap room. Thought to date from the 19th century, it may be among the earliest known to survive nationally.

The Red Lion (Rugeley, Staffordshire) is Grade II listed 19th century pub that originated as a house in the early 1600s. It is an early building within central Rugeley and is one of the last surviving 17th century buildings on what once was a busy commercial street. The pub retains substantial fabric from its origins and from the different stages of its development. It also retains an unusual salt safe and elements of an inter-war pub interior, including panelling and fireplaces.

Explore a map of the pub listings

Who We Are
What is Listing?