A Women’s Land Army (WLA) hostel in Smallwood, Cheshire, has been listed at Grade II by the Department for Digital, Culture, Media and Sport on the advice of Historic England, in recognition of its historic importance.

“Sustained the life of the nation”

The WLA, commonly known as the land girls, played a key role in feeding the country during the Second World War. In 1939, despite the hard lessons of the First World War, Britain imported the majority of its food. The WLA was first established in 1917 and re-formed in 1939 on the brink of war to work the land. Throughout its history around 250,000 women, mostly in their teens or early twenties, served as land girls.

Though they were young and many had little experience of farming or the countryside, they made a major contribution to reducing our annual food imports, ultimately producing around 70% of all the food the country needed.

Their uncomplaining willingness to endure the hardships of the tough work also demonstrated to doubters the capability of women, which helped the feminist cause in the post-war years.

The land girls got us through one of the lowest periods in our country’s history. Many of us will have had land girls in our own families- they were normal young women, often from towns and cities, determined to do their bit for the war effort. Many will have stayed in simple hostels like this one, enduring often difficult and unpleasant working conditions with little complaint. Listing recognises the rarity of this building but also how important the women who used it are to our national story.

Simple, functional and a rare survival

Hostels were set up in a range of existing buildings, from country houses to stables, to allow land girls to eat, sleep and socialise together so they didn’t become isolated at the often remote farms.

From 1942 hostels like this one were purpose-built and housed up to 48 women. Only around 200 purpose-built hostels are thought to have existed nationally and of those many have been lost over the past 75 years, making this example in Smallwood a rare survival.

As we prepare to commemorate the 75th anniversary of VE Day later this year, I'm delighted by the news that this hostel will now be preserved and protected for future generations. We owe a debt of gratitude to the Land Girls who served during the Second World War and this is a great way to recognise their important contribution to the war effort.

It is a humble, purely functional building, as all the hostels were, and simply made from plain materials. It had concrete floors and minimal heating via pipes and coke stoves. Nora Wright, a 14-year-old orderly who later joined the WLA, described the building’s

cold concrete floors. Coke stoves and a coke boiler provided heating but there was none in the dormitories. It was my job to supply the large barrowloads of coke.

The hostels were staffed by orderlies and a warden or matron and had the same layout of a dormitory, dining and common room, kitchen, matron’s room, sick room, bathroom and showers. Although it was later reused for many years as a pigsty, inside you can still see key original features, including the fireplace in the matron’s sitting room and the fixtures around the windows for securing a blackout. 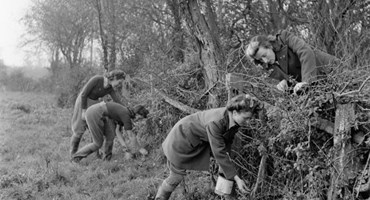 Women in the Workforce During the Second World War: Taking on Men's Roles

Read our blog about how women took on men's roles as labour shortages became acute.

During the Second World War Balcombe Place, West Sussex (Grade II* listed) was used as the administrative headquarters for the Women’s Land Army.