Several of England’s historic cathedrals were damaged in bombing raids during the Second World War. None suffered so terribly as the Cathedral Church of St Michael in Coventry.

Coventry had suffered a series of air raids between August and October 1940. The city had a number of factories that made engines, aeroplanes and munitions, all vital to Britain’s war effort.

Realising that Coventry would be a target in raids the Cathedral Provost, the Very Reverend Richard Howard, set up a fire watch known as the Coventry Cathedral Guard in the autumn of 1940. This group of around 12 men watched over the cathedral in shifts, with four on duty at any time.

The Cathedral Guard had their first taste of action on 14 October 1940 when an incendiary bomb broke through the Cathedral roof. To tackle the fire successfully the team had to remove the ancient lead sheeting. If they failed to do this, fire in the wooden roof would melt the lead, sending a river of burning droplets down to the wooden pews below.

The sheets were very large and heavy, and difficult to shift, even for a team of four men. Over £1,000 of damage was caused before the fire was put out.

The most devastating raid on Coventry took place on the evening of 14 November 1940 and continued into the early hours of the following day.

Shortly after 7 pm, Reverend Howard assembled his team of three volunteers - Jock Forbes, a stonemason, Mr Eaton and Mr Wright - on the roof of the nave.

The sky was clear with a bright moon, perfect weather for bombers to find their targets. Ten minutes later the air raid sirens sounded, and people began to make their way to shelters. Several headed for the cathedral’s crypts.

The raid began shortly after with a wave of high-explosive bombs, intended to take out the water, electricity and telephone systems. Then a wave of incendiary bombs began to fall across the city.

A heroic but hopeless task

The first few struck the cathedral at around 7.40 pm. By 8 pm there had been direct hits on the roofs of the chancel and Smiths’ Chapel, the nave, the south aisle and the east end of the Girdlers’ Chapel.

The four men of the Cathedral Guard did their best to deal with the attack while waiting for the fire brigade. They threw buckets of sand over the bomb on the chancel and managed to get it out of the building.

Meanwhile, the bomb in the nave had set the wooden pews alight. The fire took several buckets of sand before it died out. Another bomb had set the ceiling alight above the organ. Reverend Howard and his team used stirrup pumps to put out the fire, but the lead was still smoking and it took them some time to dislodge the ceiling sheets.

As they were doing this, yet another bomb fell on the Cappers’ Chapel and set the beams alight, pouring fire down onto the wooden chairs beneath.

We were all extremely exhausted by this time for we had been working at extreme pressure for a long time … then another shower of incendiaries fell, and four appeared to strike the roof of the Girdlers’ Chapel.

Water and sand supplies were running low, and there was nothing that the men could do.

The Solihull Fire Brigade arrived at the cathedral at 9.30 pm but it was too late to save the building.

Meanwhile, Reverend Howard and the other three volunteers cleared what valuables they could from the cathedral and helped to evacuate anyone sheltering in the crypt.

The next morning it was clear that little had been saved. Although one resident remembered taking "great satisfaction in the fact that the spire still stood", the roof and most of the building were in ruins (Bull, undated).

[It was] the strangest sight of all … At each end the bare frames of the great window still have a kind of beauty without their glass; but in between them there is an incredible chaos of bricks, pillars, girders, memorial tablets.

The raid had been devastating for the whole city. Around two-thirds of its buildings were damaged, and over 500 people lost their lives. Many more were seriously injured.

When King George VI visited Coventry on 16 November, the day after the fires were extinguished, he was photographed in the Cathedral ruins. The images shocked the British public but Reverend Howard was determined not to encourage calls for revenge.

Jock Forbes, St Michael’s stonemason, who had been part of the team on fire watch that night, put two of the massive charred beams together to make a cross that was placed near the ruined alter. The words "Father, forgive" were written close by on the walls.

At the end of the war, the cathedral’s leaders decided that the ruins should be preserved as a memorial to the horror and waste of war, and a new cathedral built alongside them. Forbes’ cross can still be seen in the new cathedral today. 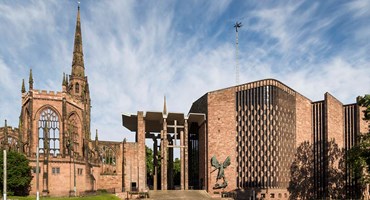 The Destruction and Rebirth of Coventry Cathedral

On the evening of 14 November 1940, over 500 bombers from the Luftwaffe targeted Coventry killing 568 people and destroying over 4,000 homes. 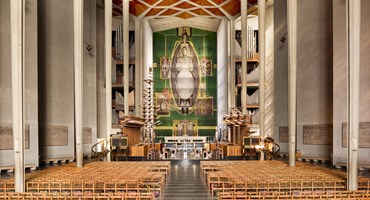 Coventry: A Journey Through Time

From the ruins of St Michael’s Cathedral to the Black Prince’s Manor and the old Council Chambers, Coventry’s walls are brimming with history. 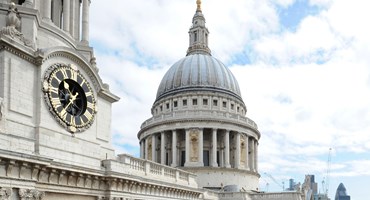 Transcript of our podcast A History of England in 100 Places - Art, Architecture & Sculpture 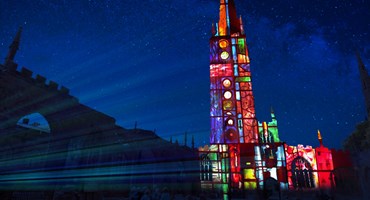 A spectacular installation of light, history and poetry at Coventry Cathedral.