Immortalised in the East

Public memorials are everywhere, when you start looking for them. People, events and places of interest are marked by statues, plaques and artwork all across our region. They can pop up spontaneously, like the graffiti art memorial to Professor Stephen Hawking on a bridge in Cambridge shortly after he died; or be a lasting planned public statement.

We explore below some of the heroic, quirky, sad, inspirational and challenging local monuments in the East to inspire you to nominate little-known local memorials as part of our Immortalised season and help more people learn about the people and places that previous generations wanted us to remember.

Many monuments mark tragic events that caused significant loss of life. The Eliza Adams Lifeboat Memorial at Wells-next-to-Sea in Norfolk (listed Grade II) is one of them. Eleven of the twelve crew lost their lives in 1880 on the lifeboat's second rescue mission of the day in heavy sea and severe gale, leaving behind ten widows and 28 children. At St Mary's Church in Cardington, Bedfordshire, you will find the memorial and gravesite for those that died on board the maiden voyage in 1930 of the largest airship in the world, the R101. Built in Cardington (airship hangers no1 and no2 are Grade II*), the airship crashed in France enroute to India killing 48 of 54 people on board.

The Flaming Heart gravestone in St Mary's Church, Burwell, Cambridgeshire marks the mass grave for 78 people, mainly children, who died watching a travelling puppet show in 1727. It was held in a thatched barn and such was the demand to see the show that the doors were locked to prevent more people coming in. The original news report stated that a child had crept in with a candle and accidentally set straw alight in the barn. However, later accounts report a deathbed confession from a man who had a grudge against the puppeteer who had set light to the barn in order to stop the show, not realising that the doors had been locked.

The memorial to Thomas Clarkson in Wisbech (listed Grade II*) celebrates the birthplace of a leading campaigner for the end of the slave trade and slavery. His research and the evidence he collected, including the infamous diagram showing the horrific conditions on slave ships for the people being transported, helped convince MPs to abolish the trade in 1807 and slavery itself in 1833. Other memorials to Clarkson can be found at St Mary's Church, Playford, Suffolk (where he died) and High Cross, Thundridge, Cambridgeshire.

A more modern commemoration is the DNA memorial to Francis Crick at Gonville and Caius College, Cambridge which was unveiled by his research partner, James Watson. Crick, Watson and Maurice Wilkins of King's College London received a Nobel Prize in 1962 for the discovery and Wilkins' subsequent verification of the results. More recently the role of Rosalind Franklin in the discovery and whether she has been omitted from public recognition has been a subject of debate. Franklin took the famous 'Photo 51' which sparked the discovery and was one of the authors, along with Crick, Watson and Wilkins, of the three ground-breaking scientific papers published in Nature in April 1953.

Prince Alexander Obolensky was a Prince of Russian origin. He represented England in international rugby and has since become immortalised with a statue in Cromwell Square, Ipswich. He was killed at the age of 24 in a fighter aircraft accident in 1940 near Ipswich. Sculptor Harry Gray, who also worked famously on the Battle of Britain Memorial at Dover, was chosen for the project. In February 2009, the bronze statue was unveiled by his niece, Princess Alexandra Obolensky.

The scallop shell tribute to the composer Benjamin Britten and his music stands on the beach just north of Aldeburgh (the town was the home of the composer). Unveiled in November 2003, the 4 metre high steel sculpture is pierced with the words,

I hear those voices that will not be drowned

The sculpture was conceived by the Suffolk artist Maggi Hambling and made by Aldeburgh craftsmen, Sam and Dennis Pegg.

How do I suggest a memorial?

Other places, people and events Immortalised in the East include: 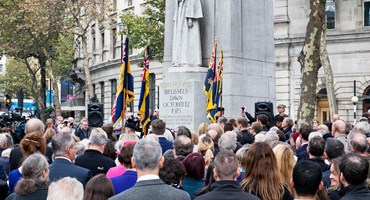 A season of activity from Historic England, it explored how, why and who England remembers in its streets, buildings and spaces.