To mark 100 years since the Battle of Jutland, memorials across England with powerful connections to the infamous engagement in the North Sea are being protected through listing by the Department for Culture, Media and Sport on the advice of Historic England.

Three remarkable war memorials are newly listed, four have been awarded a higher listing status and a Grade II* church has had its list entry enhanced to acknowledge its important association with Jutland.

The listings come ahead of the UK Government centenary commemorations of the Battle of Jutland, which will take place in the Orkney Islands on 31 May.

The Battle of Jutland was the most significant naval engagement of the First World War with over 100,000 sailors involved on 250 ships. More than 6,000 Royal Navy and 2,500 German sailors lost their lives. 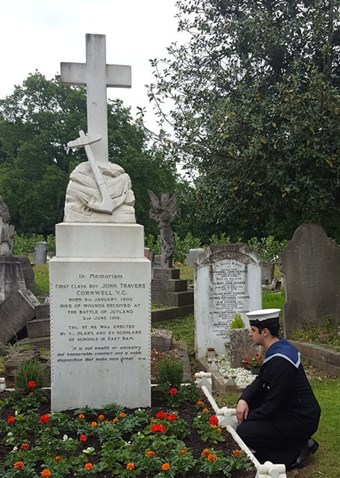 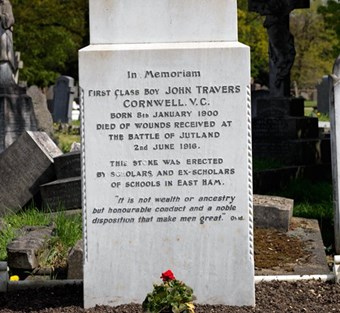 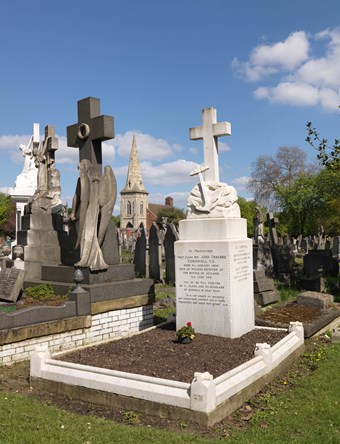 One of the many sailors killed was Boy (1st Class) John ‘Jack’ Travers Cornwell. As a member of a gun crew on HMS Chester he came under intense fire on 20 May 1916 when four German ships attacked. All of Jack’s gun crew were killed or fatally injured. Jack courageously remained at his post awaiting orders, despite severe shrapnel wounds. He died on 2 June 1916. He was only 16.

Following a national campaign which hailed him as the Boy Hero of the Naval Battle, Jack was posthumously awarded the Victoria Cross for bravery and was buried in a new grave with full military honours in Manor Park Cemetery. Today we announce the listing of Jack’s grave, managed by the Commonwealth War Graves Commission, at Grade II.

In the City of London, another memorial bears Jack Cornwell’s name. Listed today at Grade II, the Bishopsgate Memorial in the churchyard of St Botoloph’s-without-Bishopsgate, unveiled 4 August 1916, is thought to be the first freestanding First World War memorial erected in London. It commemorates Jack Cornwell, the Honourable Artillery Company, local parishioners and notably the death of Field-Marshal Earl Kitchener. News of the death of Kitchener, who drowned off Orkney in July 1916, shocked the nation and sparked a wave of public mourning.

As so many were lost at sea, memorials dedicated to those with no known grave were erected by the Imperial (now Commonwealth) War Graves Commission at the naval ports of Chatham, Plymouth and Portsmouth in the years after the war. These three commanding monuments, each with a 100-foot high Portland obelisk designed by Sir Robert Lorimer, bear witness to the tragic loss of life in both world wars and have all been upgraded to the highest listing - Grade I. The memorials are still cared for today by the CWGC.

Barry Murphy, Director of Operations at Commonwealth War Graves Commission, said:
“The Commonwealth War Graves Commission’s memorials at Portsmouth, Plymouth and Chatham are part of our commemorative heritage – a vital component in marking the sacrifice of those who died at sea. Today’s listing recognises the care and vision of the CWGC in constructing and caring for such places and will encourage ever greater numbers to visit and to remember.”

Portsmouth is also home to a distinctive memorial in Guildhall Square, today upgraded to Grade II*. Raised to commemorate the war dead of both the Army and the Navy in the First World War, it is inscribed with 4,500 names, 500 of which died at the Battle of Jutland. The memorial, and its larger-than-life stone machine gunners, carved by the renowned sculptor Charles Sargeant Jagger, was unveiled in 1921 by Queen Victoria’s grandson, the Duke of Connaught. 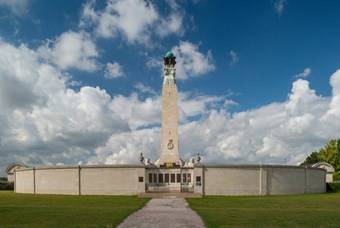 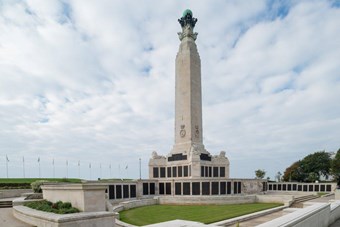 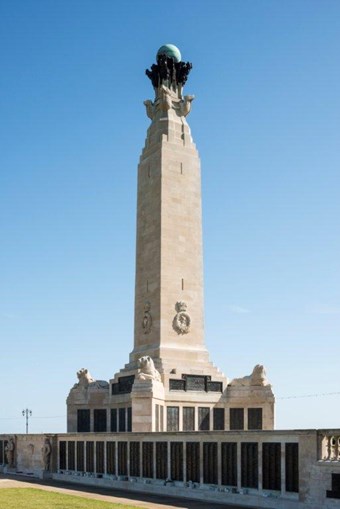 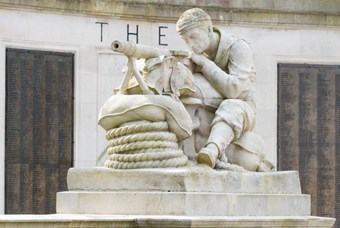 A very unusual war memorial in Leckhampstead, Berkshire has also made the grade for listing. It is surrounded by low chains, reputed to be from a ship that served at the Battle of Jutland, which hang between 12 shell cases. The obelisk features more armaments – two clock faces with hands made from bayonets and hours marked by spent bullets and cartridges. Two over-sized bronze medallions are also set into the stone, based on the British War Medal awarded to all those who entered service during the war. This memorial, listed today at Grade II, commemorates by name not only the 17 local men who died in the First World War but also all those who served.

Grade II* St Michael’s church in Brooksby, Leicestershire has had its list entry enhanced to acknowledge its connections to Jutland. Inside the church is a beautiful marble wall plaque commemorating the lives lost during the Battle of Jutland, a commemorative bronze bust of Admiral Beatty and the Union Flag flown from Beatty’s flagship HMS Queen Elizabeth when the German High Seas Fleet surrendered in November 1918. Brooksby was home to Admiral David Beatty who played a prominent part in the Battle of Jutland. The church sits in the grounds of Beatty’s home, Brooksby Hall (Also listed Grade II*).

Roger Bowdler, Director of Listing at Historic England, said:
“Jutland was the crescendo of the naval war. Its casualties and its ships lie on the seabed, west of Denmark, but the memorials back home continue to remind us of these lost lives. Giving them the recognition they deserve through appropriate listing is one way that we can ensure their future, and pay tribute to their bravery.”

David Evennett, First World War Minister, said:
"Jack Cornwell is one of the many brave sailors who lost their lives at the Battle of Jutland who we will honour at the centenary commemorations. It is important that their sacrifice is never forgotten. It is right that we list these important memorials to ensure they are protected for generations to come.”

These listings are part of Historic England’s pledge to list a total of 2,500 war memorials over the centenary of the First World War. To do this we need members of the public to put their war memorials forward for listing.

This is all part of a wider partnership we have forged with War Memorials Trust, Civic Voice and the Imperial War Museum to help communities care for and conserve their local war memorials. Working with enthusiastic volunteers across the country, the programme is providing up to £2million in grants for war memorial repair and conservation and hundreds of workshops to teach people how to record their memorials and put them forward for listing.

Our goal is to ensure that as many war memorials as possible are in a fitting condition for the centenary, and that they remain cherished local landmarks for generations to come.

Spotlight on the Leckhampstead obelisk 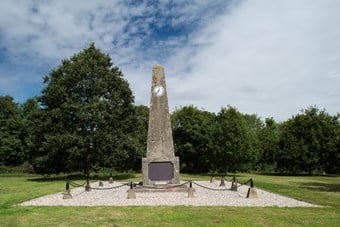 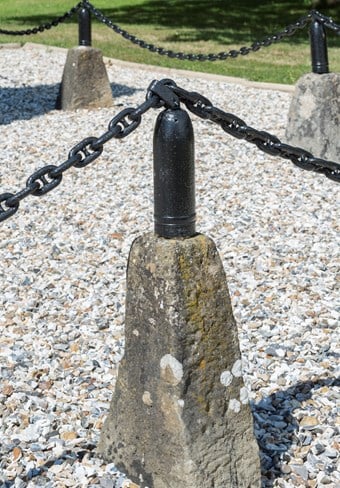 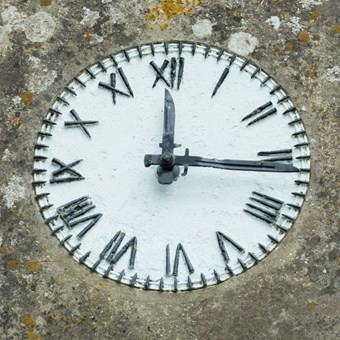 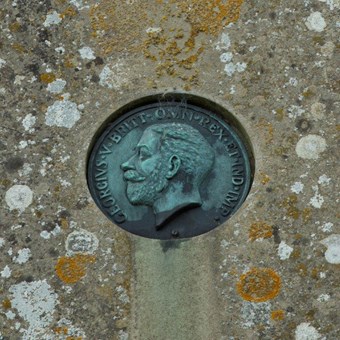