12 of the Best Post-War Schools Listed

A plastic classroom known as 'the bubble' at Kennington Primary School in Preston and Patty Hopkins' high-tech Fleet Infants School in Hampshire are among the best examples of post-war schools around the country listed at Grade II by the Department for Digital, Culture, Media and Sport on the advice of Historic England.

Post-war Britain was an innovative period in school design with school building driven by the 'baby boom', the raising of the school leaving age, planned new towns and estates and the reconstruction of bomb-damaged buildings. Scarce resources were concentrated on primary schools for the immediate post-war baby boom; the majority of secondary schools were constructed after 1955.

Duncan Wilson, Chief Executive of Historic England said:  'We are pleased to have these impressive and diverse designs join the List, as they express imaginatively the new approaches to education in the post-war period. Careful and innovative use of materials distinguish the buildings and reflect the investment at the time'.

In considering post-1945 schools for listing Historic England looked at how well the school illustrates innovative architectural design, its construction, materials and artistic interest, extent of survival and how the design reflects changes in educational thinking of the period.

The newly-listed schools join 50 other listed schools from the post-war period including Acland Burghley in North London which was listed last year.

Headteacher, Nicholas John, said: "We are so proud that Acland Burghley School has been listed. Our wonderful building makes an exceptional educational environment and supports a vibrant culture of creativity and excellence. Being recognised in this way has helped us to celebrate a school which sits at the very heart of the local community."

Fleet Infants School was designed in 1984-5 by important high-tech architects Michael Hopkins and Partners under Patty Hopkins for Hampshire County Council. It stands out as a high-tech, cost-effective solution for a design for a school which provided a light, airy and adaptable working space. The school was their first completed building to combine a light-weight steel frame with Teflon-coated awnings. The school was designed and built in collaboration with the structural engineer Ted Happold, an innovator in lightweight construction techniques. The building has an inventive and accomplished design, which is well-planned and little-altered. The blue cladding is complemented by the blue Teflon-coated canopies which provide shade on the south facing sides of the building and shelter on the north.

Both schools were built by Hampshire County Council Architect's Department under Sir Colin Stansfield Smith. Springwood Junior School stands out for its eccentric design as one of Hampshire's 'barn' schools. They were categorised by a single, wide roof which provide a variety of spaces to allow for different types of activity and learning and each classroom has its own access into the grounds. The school has been little altered since its construction and the earthy palette of brick, tile and timber brings warmth to its interior.

Bosmere Junior School is little-altered and has a sophisticated layout with a variety of spaces. The use of traditional materials including brick, timber-frame and pitched slate roofs is combined with intricate sectional planning and generous glazing. The interior, with its split levels, exposed brick and timber finishes and boldly painted metalwork adds interest as well as the concept of its indoor street with frosted orbs acting as internal street-lights.

Vanessa Nursery School, designed and built in 1970-2, is highly unusual for its bespoke collaborative design and approach to nursery education by an education trust established by the actress Vanessa Redgrave and the local education authority. It was designed by leading firm Fitch and Co and represents an infusion of pop architecture with product design principles to create a reassuring, welcoming space for nursery age children. The use of brightly-coloured Glass Reinforced Plastic pods in red and cream is relatively early for this technology and is forward-thinking for an educational building at this time. 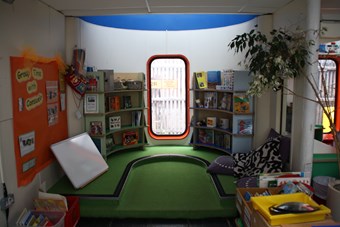 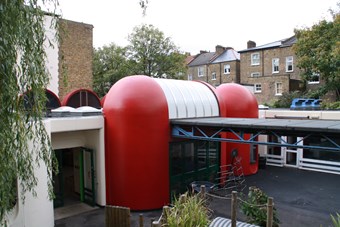 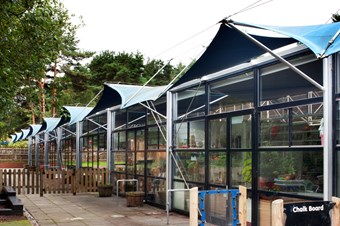 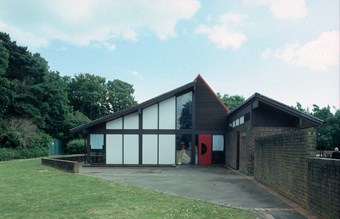 The highly innovative plastic classroom nicknamed 'the bubble,' was built in 1973-4 to designs by the Lancashire County Council Architects' Department under Roger Booth. It was designed as a prototype for a system of pre-fabricated mass production of schools by the council. It is based on self-supporting glass fibre-reinforced plastic panels and makes early use of computer-aided design to produce the complex geometrical designs needed for rigidity. It also has educational interest as the look of the classroom reflects 'teaching in the round' with freedom of movement and fluid arrangements of space to engage pupils.

Archbishop Temple School was built in 1964-6 to the designs of important post-war architectural practice, Building Design Partnership. It is a bold and complex group of buildings stepping down a hillside with each block having its own design and identity and expressive timberwork. The interior is little-altered and reflects design features aimed to stimulate learning. For example, the assembly hall has a striking sculptural ceiling and the chapel is comprised of an exposed timber frame structure which rises up to a circular light. There is also an abstract stained-glass window in the main entrance by the renowned artist and sculptor William Mitchell.

St Olave's Grammar School is an ambitious and creative design by renowned architecture firm Robert Matthew Johnson-Marshall and Partners (RMJM). Built in 1966-7, its combination of careful and generous planning around open quads gives it a collegiate quality.  This puts it on a par with further education buildings of the period such as York University also designed by RMJM. The school has unusual features such as the outdoor amphitheatre, the pentagonal chapel sited in front of and over the main entrance, five courts and an impressive double-height Great Hall which functions as an assembly hall, dining room, theatre and concert hall. 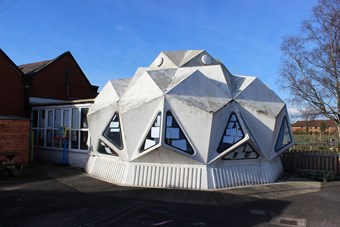 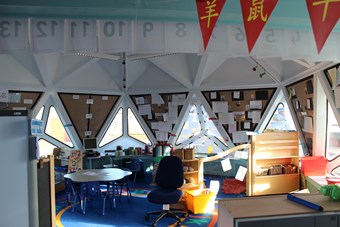 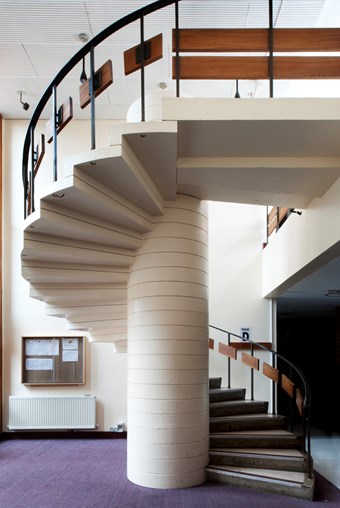 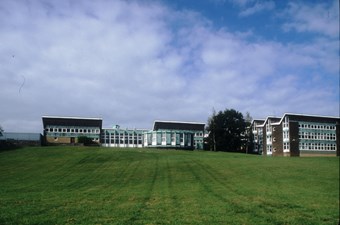 These two schools in Leicestershire are important examples of the Leicestershire Plan, which was devised in 1957 to encourage self-discovery and informal group working rather than rote learning:

Richmond Primary School was built in 1968-70 to the designs of Leicestershire County Council's Architects' Department. The school expresses these new ideas through its distinctive circular plan with the library at the centre. A striking feature is the side-lining of the hall which is attached via a linking corridor to the circular teaching building. The school also follows a top-lit plan instead of having large areas of glazing from the sides which was a significant development in Leicestershire school planning.

Wreake Valley Community College (now Academy) was commissioned by Leicestershire County Council and built in 1967-71 to designs by Gollins, Melvin, Ward and Partners (GMW). It is the most architecturally striking of the new Leicestershire colleges built by GMW. Built on a 50 acre site and designed to house 1440 pupils, it was planned with both adult and youth facilities to serve the whole community. It is a huge sculptural three-storey school, with a central auditorium and library at its heart.

Hopton Church of England Primary School was built to the designs of West Suffolk County Council's forward-looking Architects' Department and opened in 1973. The design of the school combines a prefabricated building system with bespoke external and internal detailing such as distinctive brickwork corner 'turrets.' Together, these form a distinctive new-build composition strongly representative of post-war public sector development considerations such as speed and having a tight budget. The teaching areas of the school are arranged around a semi-enclosed central hall; a common plan in post-war primary schools in Suffolk.

Established architects Johns, Slater and Haward led the schools' post-war building programme in Ipswich. In the years 1948-74 they designed 44 new primary schools and nine secondary schools in the town. Birkin Haward became known as one of the foremost post-war regional architects and Sprites Primary School is one of his most architecturally-striking buildings. He shows exceptional technical innovation by the pioneering use of a hyperbolic paraboloid timber roof.

The secondary school building was commissioned following a competition by the Federal Republic of Germany in 1971 for the newly-established and growing German School for the children of German diplomats in London. The winning entry took into account the school's sensitive location in parkland next to Grade I listed Ham House. Two low, spreading structures were built each with a massive roof to house the main school building and a sports hall. Built in 1978-81 by German architects Kersten, Martinoff and Struhk, it was generously funded by the Federal Republic of Germany - the value of the contract at £5.5m in 1978 was three times that of a British state secondary school. It follows an imaginative and flowing plan laid out on two levels using high quality materials and finished to an exemplary standard. 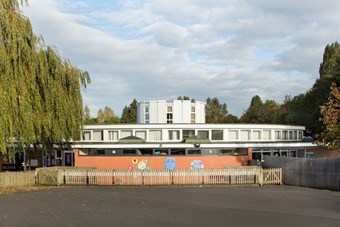 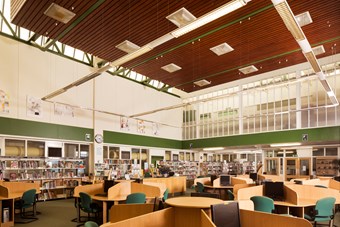 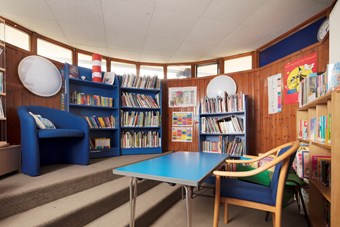 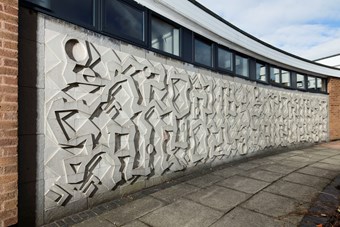