From a Tardis-like ventilation shaft in the middle of Newcastle, to a Space Age sculpture unveiled in the same year that Britain’s first satellite was launched and a poignant reminder of a mining disaster which tore apart a community, the Department for Culture, Media and Sport has today listed 5 pieces of post-war public sculpture in the North East of England on the advice of Historic England.

These 5 sculptures, all listed at Grade II, depict a range of themes each encapsulating different aspects of the North East’s diverse identity.

Most of these sculptures were part of a movement across the country which saw art and sculpture being used to bring our public spaces back to life after the Second World War as England repaired its shattered towns and cities. This art was created for everyone, to humanise and enrich our streets, housing estates, work places, shopping centres, expanding universities and schools.

Like many others across the country, some of these pieces were unpopular at the time, being seen as too unsettling or too avant-garde. Only now are they being recognised and protected as part of our irreplaceable national collection of public art. An extraordinary resurgence of public art in the North East in the 1990s means that the region now has one of the highest concentrations of recent public art in England.

Heritage Minster Tracey Crouch said:
"It's vital that important parts of our heritage are secured for generations to come, so I'm delighted that these fantastic post-war public sculptures, which transformed public spaces across the North after the Second World War, will now be protected. I encourage everyone to visit the Out There exhibition in Newcastle to learn more about the stories behind these pieces of post-war public art."

Roger Bowdler, Director of Listing at Historic England said: “The north of England has an extraordinary collection of post-war public art. These newly listed are some of the most striking examples of how art was used as a symbol of revival, commissioned and created for everybody. They enrich our lives, bring art to everyone and deserve celebration.”

Perhaps the most important of the pieces of post-war public art in Newcastle, Spiral Nebula was created by Geoffrey Clarke in 1962 in polished steel to adorn the exterior of Newcastle University Physics Department's Herschel Building. The building’s architect Sir Basil Spence felt it would detract from his architecture so asked for the piece to be painted a dull grey and sited at ground level in front. Its vertical antenna was stolen by vandals and the piece fell into disrepair until the University asked the artist’s son Jonathan Clarke, also a sculptor, to restore the sculpture in 2012. Jonathan recalls that he had to remove 40 bin liners full of pigeon droppings from the sculpture’s cavities and recast the antenna.

Commissioned as part of the “Art on the Metro” scheme to enliven the Tyne and Wear Metro, this sculpture also functions as a ventilation shaft. It celebrates Sir Charles Parsons, one of the most influential of all British engineers, who developed steam turbines in Newcastle. Its orange terracotta tiles were intended to “stir the curiosity of the locals” and are decorated with cogs and machine parts inspired by Parsons’ engineering drawings. They are made from the same clay used to make the bricks for Eldon Square, the shopping centre it stands next to.

This commemorates the loss of 83 men at Easington Colliery in 1951 after a terrible explosion and marks their communal grave. On the memorial the Easington miner is portrayed as an ordinary man caught up in extraordinary happenings, rather than as a monumental heroic figure. His safety equipment such as his helmet and head lamp are carefully emphasised to poignant effect. The memorial commemorates both individual acts of sacrifice and a sense of communal service.

This rough bronze sculpture of a Roman peasant woman was designed for a shopping centre in Wallsend at the east end of Hadrian’s Wall. With her stoic pose and basket of hens balanced on her head, the artist Hans Schwarz wanted to depict, in his own words, a “tough, hardworking peasant, not a graceful girl”, to highlight the reality of life for common people in this area under the rule of Emperor Hadrian. It also echoes the hardships Schwarz himself endured as an Austrian Jew, who had to flee the Nazis and whose father perished at Auschwitz.

Made from inexpensive and locally-available materials, this depiction of a train steaming through the landscape celebrates the railway heritage of the Derwent valley in a colourful, energetic way. The piece was a pioneering example of public art, embodying the emergence of the movement: only 35 installations in the North East date from the 1980s – the 1990s saw 180 pieces of public art. The North East now has one of the highest concentrations of recent public art in England. 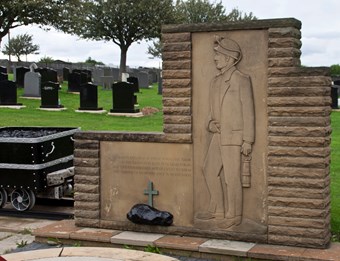 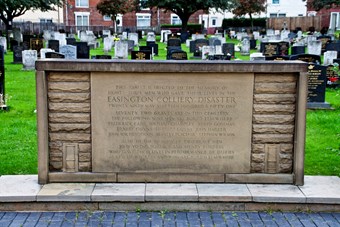 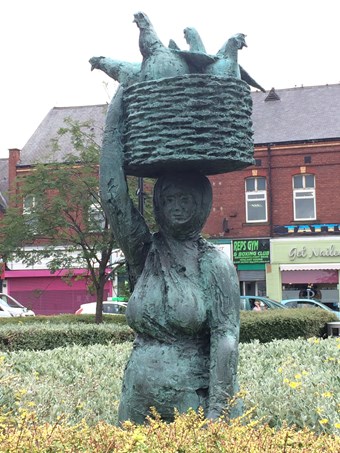 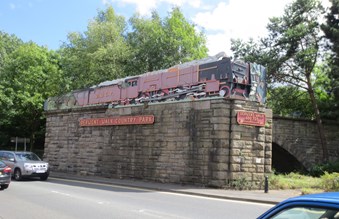 The stories behind these sculptures - the newly listed, loved and lost - will be explored in Historic England’s new free exhibition at Bessie Surtees House in Newcastle open from 8 September – 23 December 2016. Out There: Our Post-War Public Art will help raise awareness of our national collection of public art and the stories behind it in order for people understand and cherish these works.

Sadly, our artistic heritage is in danger of being taken for granted and whilst some post-war sculptures are being protected, others remain lost, damaged or destroyed. Historic England has discovered that many works of public art across England are missing, including one by Antony Gormley called A View, A Place, created as part of the 1986 National Garden Festival at Stoke-on-Trent. The life-sized figure of a man was placed at the highest point of the Festival overlooking the Fowlea Valley. When the Festival closed the sculpture was removed and to date its whereabouts are unknown. Historic England is today asking members of the public who know anything about the piece to get in touch via [email protected]

Historic England has compiled a list of works that have been lost, sold, stolen or destroyed which can be found at HistoricEngland.org.uk/missingpublicart. Does anyone ‘out there’ know what happened to the bright red and blue fibreglass sculpture by Luise Kimme attached to an outside wall of the Laing Gallery in 1972? Do you have early photographs of Spiral Nebula outside Newcastle University Physics building? We are particularly interested to see photographs of the sculptures when they were first installed. Please send scanned photographs and information to Historic England – [email protected]