The Ramsgate Tunnels, in the seaside town of Ramsgate in Thanet, east Kent, have been transformed from a derelict railway line and bomb shelter into an exhibition space, café and tourist attraction through the hard work of volunteers.

The only Royal Harbour in the United Kingdom, in 2017 Ramsgate was named one of the first ten Heritage Action Zones in England and the first in the South East.

It's rich in heritage with over 450 listed places including 443 listed buildings, one scheduled monument, one registered park and a number of shipwrecks off the coast. The construction of Ramsgate Harbour began in 1749 and was completed around 1850.

Once a thriving and prosperous town with an economy based on agriculture, fishing and tourism, large parts of Ramsgate are now in the 10% most deprived in the country, according to the Index of Multiple Deprivation. Despite the richness of its historic environment, Ramsgate has a poor self-image, significant socio-economic problems and many of its heritage assets have been neglected because their economic and cultural worth are not fully understood or recognised.

This is now changing. The Heritage Action Zone is helping Ramsgate with its self-image, helping to regenerate the town and engage those that live, visit and work there with its heritage.

History of the Tunnels

Originally constructed as a railway to connect the harbour of the town with the main train line, Ramsgate Tunnels are two and a half miles long and in some places are as much as 27 metres below the surface. The largest of the tunnels, dates back to October 1863, when it was opened as a railway tunnel serving Ramsgate Harbour Station.

The line closed in 1926, when the current Ramsgate station opened. However, the tunnel was brought back into use in 1936, when a narrow gauge railway ran between Hereson Road and the seafront.

On 24 August 1940, 500 German bombs were dropped on Ramsgate in just five minutes. Despite the heavy bombardment, the deep shelters saved lives and as a consequence only 29 civilians and two soldiers were lost. The bombardment on 24 August 1940 destroyed roughly 1,200 homes and, as a result of homelessness, roughly 300 families took to living in the tunnels on a permanent basis.

The tunnels became a subterranean town with shops, barbers, canteens, concerts and even an underground hospital. After the end of the war, the tunnels were slowly sealed and abandoned.

The scenic railway was re-opened in 1946 but was finally closed in 1965. Following this, the tunnels were derelict for a number of years, and without regular maintenance the tunnels were in danger of deterioration and collapse.

New commercial use of the Tunnels

Redevelopment of the tunnels has since helped to re-connect the people of Ramsgate with an important part of their heritage, and brought back an empty underused space into use, contributing to the local economy by providing jobs and drawing in visitors.

The attraction of the tunnels is their unique aesthetic that is a fundamental part of Ramsgate’s wartime heritage. Also the space also allows for a fairly flexible approach to usage as, in many ways, it is considered a blank canvas. This has allowed for gallery space, café space, guided tours and the ability to host events, such as vintage fairs. The re-use of the tunnels has allowed more people to access them, contribute to the maintenance and upkeep, and has allowed for commercial activity through the café and holding events.

Development of the wider historic area

Since Ramsgate is currently the focus of a Heritage Action Zone, there is other development going on in the area. There is currently a need for more community space within the town and so much of the work that is being done is in trying to adapt and reuse redundant historic buildings and create functional and useable community spaces. There is also a development in Ramsgate that has turned Railway arches into viable gallery, studio and café spaces. These allow local artists the space they need to create their work.

Ramsgate Tunnels are just one of a number of projects in the town that are re-using heritage buildings to create vibrant community spaces that not only suit the needs of the town but also help re-energise the local economy by providing jobs and increasing visitor numbers. 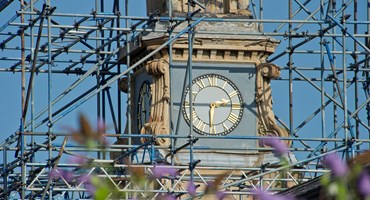