Microsoft Edge
Update browser
Share this page
Share
Holgate Windmill, York, is an early tower mill with five sails, cap and fantail. Built 1770 and restored 2012. It is now on a roundabout in a 1930s housing estate. © Nick Ansell

Flour Milling in a Time of Coronavirus

By the Traditional Cornmillers Guild

First it was toilet rolls, then it was tinned tomatoes. Now, with everyone at home, bored and wanting to bake, it’s flour and yeast. Not that there’s a shortage of flour, but the big roller mills are largely geared up to making bulk deliveries to bakeries, caterers and food manufacturers. So that leaves small traditional mills to produce and pack shopping-basket sized bags of flour.

The Traditional Cornmillers Guild represents some 35 wind and water mills around the UK. All must mill on horizontal millstones and be primarily driven by wind or water. They vary considerably in normal output and ways of working. Some are, already, quite large-scale flour producers, milling about 300 tonnes of grain per year.

They provide a living for the miller, who can also be the owner of the mill. Other mills are owned by local authorities, bodies such as the National Trust, and local charitable trusts, often run entirely by volunteers.

In these mills there is a wide variation in the balance between being heritage visitor attractions, and commercial flour producers, but in the past couple of months, they have one thing in common: there is no visiting of these mills to marvel at their historic machinery. A few have closed altogether (although routine safety maintenance will be vital – especially for windmills). The rest have devoted themselves exclusively to a greatly increased level of flour production.

Holgate Windmill in York (run by a community charitable trust) was to have celebrated its 250th anniversary this year and was hoping to attract a record number of visitors to its many commemorative events.

All of a sudden, everything is on hold (until we are 251 years-old!) and small teams of three volunteer millers are going in three or four times a week to mill about five times as much flour as usual. The Saturday shop sells out, and local stockists are putting in frequent wholesale orders for our wholemeal wheat and spelt flour.

Other Guild mills are also working flat out to satisfy an extraordinary demand: at Heatherslaw in Northumberland and Worsbrough in Barnsley (two ancient watermills) the sudden rise in demand meant dramatically increasing flour production by as much as 500%.

However, the mill shops are eerily quiet, donations are non-existent and the cafés are shut up as no visitors are allowed on site. And the pattern is replicated all over the country.

There’s been enormous interest from the media, both local and national, in this phenomenon. There have been radio interviews and local and national TV and newspaper features. These have raised the profile of traditional mills and shown that an ancient industry has huge modern relevance: not least by highlighting the green credentials of wind and water-powered machinery.

Another outcome is that many more people are experiencing the flavour and quality of stone-ground wholemeal flour, as well as learning to bake bread, cakes and pastries. We hope, when this is all over, we will discover that we have recruited many converts to the joys of healthy, additive-free, wholemeal flour. That increased custom will, in turn, help to preserve these wonderful examples of our industrial heritage.

What support do you think the heritage sector needs to help survive and recover from the Covid-19 restrictions? 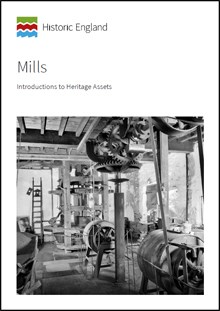 An introductory guide to Mills.