In autumn 2009, High Wycombe town centre appeared to be in crisis. More than 15% of the premises in the town centre were lying vacant. The problem was particularly acute in the historic core of the town.

Wycombe District Council faced a stark choice. It could do nothing, and hope that economic conditions would quickly turn around. Alternatively, it could do something proactive, and a new planning instrument offered a potential solution.

Introduced in 2004, local development orders (LDOs) allow councils to grant certain types of development specified in individual orders without planning permission. But none had so far been used, and the government was keen to encourage their take-up. The council therefore decided to experiment with the tool, and joined a working group of authorities which were also aiming to pioneer the use of LDOs for various purposes.

For Wycombe, the objective was a simple one: to allow a greater range of uses to be located in the area without the need for planning permission and in so doing to encourage take-up of empty units. So a Wycombe District Council LDO was prepared that would allow a change of use between all the A use classes (including takeaways), C1 (hotels), D1 (non-residential institutions) and D2 (assembly and leisure).

One of the main obstacles for the council was a regulation that LDOs should not be made so as to grant permission for development of a listed building. In this case, there were eight Grade II listed buildings within the town centre, some of which dated from the 16th century, albeit in altered form.

So the LDO was adopted in 2010 and became the first to be adopted anywhere in the country. It was put in place for a three-year period to give the council the chance to take stock of the outcome. The flexibility provided by the order was a radical departure from the previous policy which was much more restrictive on uses permitted. But on the other hand, the LDO allowed only changes of use, so no external alterations to buildings were permitted.

At the end of the three years, the results showed that whilst the vacancy rate in the area had fallen, no changes of use had taken place. We could not say that the improvement was down to the LDO.

In hindsight, it appears that the restriction preventing physical or frontage alterations limited the scope for any other uses to move into the area. In 2013, the council decided not to renew the order - an improvement had been delivered and other policies were now providing greater flexibility in any case.

Reflecting on the experience, perhaps a less restrictive LDO could have delivered more changes of use. If the LDO had allowed for shop front changes, then it would likely have had to exclude the eight listed buildings from its ambit. Whether it would have been more effective in helping to revive the remainder of the area whilst protecting its historic character, is an open question.

One of the other authorities on the LDO pilot group was Swindon Borough Council. Swindon was pursuing a similar LDO for Victoria Road, a key link between the Wiltshire town’s modern shopping area and its historic old town. Unlike the Wycombe LDO, Swindon’s order permitted shop front changes. In 2014, officers reported that the LDO had helped maintain steady occupancy levels and that changes of use were being taken up.

Activity in the years since then indicates that the use of LDOs as a tool for town centre regeneration is here to stay. LDOs delivering either change of use flexibilities or setting parameters for town centre developments have been adopted in various towns, including:

At national level, meanwhile, the continuing economic pressures facing town centres have seen the government emerge with plans for a much more flexible change of use regime in town centres.

Responding to these plans, many sector organisations have highlighted the dangers of wholesale loosening of planning controls in town centres. It may therefore be the case that greater flexibility in change of use is a policy more appropriately delivered at a local level in the right circumstances. LDOs may yet have a key role to play in this. They could help bridge the objectives of maintaining historic character whilst also helping town centre economies by providing flexibility to help reduce vacancies.

Please send your responses to Anna Aldous and share this article on social media.

See our advice on heritage and the planning system.

Planning for the Historic Environment

The objective of the planning system is sustainability: meeting the needs of the present without compromising future generations meeting theirs. 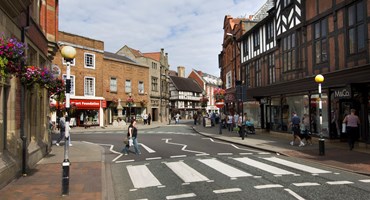