From September 1940 Britain underwent successive waves of bombing by the German Air Force, the Luftwaffe. These attacks brought the war directly to the civilian population on the Home Front.

Saving the country’s buildings, industry, transport networks and utilities from the bombing was a mammoth task. As the bombing raids continued, several groups formed to carry out this work.

Some were reliant on local volunteers. Others, like the Auxiliary Fire Service (AFS) and the Air Raid Precautions (ARP) were more official bodies. Bomb disposal was a specialist task performed by members of the armed services.

Thousands more worked behind the scenes in more clandestine roles. At Bletchley Park, the home of wartime code-breaking, code-breakers were sometimes able to predict raids. In November 1940 an attack on Bristol was discovered in time for the emergency services to be alerted and reinforcements sent from other areas.

Misinformation was deliberately fed to German intelligence leading them to target their weapons towards less densely populated rural areas rather than London. Decoy sites and false factories lured enemy aircraft away from their intended targets.

By June 1941 over 100 decoy sites protected targeted cities across England. Over 2,000 tons of enemy bombs fell on decoy sites during the war. During one raid intended for Portsmouth, 90% of the bombs fell on the decoy site on nearby Hayling Island (Gardiner, 2011, 280).

The scale of damage

Accurate statistics for damage are hard to find as records are incomplete and are often not comparable. Detailed records were kept for London during the Blitz in 1940 but in many other cities they were not put together until the raids were over.

The records do tell us something about the scale of the damage. By 15 February 1941, over 60,000 houses had been destroyed or damaged beyond repair. Over half of these were in London. By the end of the war an estimated 250,000 houses were damaged but repairable (Gardiner, 2011, 284).

Protection and repair prioritised buildings of national importance - buildings that enabled the country to continue to fight the enemy. Factories, warehouses, infrastructure and communications were more important than historical buildings of cultural significance.

In order to protect important buildings, infrastructure and the general public, a number of organisations were set up. They attracted thousands of people keen to ‘do their bit’ on the Home Front.

An Air Raid Wardens’ Service was set up in 1937 with women eligible to join from 1938. Over a million people were signed up to the Air Raid Precautions (ARP) or ‘Civil Defence’ by the start of the war.

ARP staff enforced blackout legislation, telling people to ‘put that light out!’. They reported where bombs fell and where fires had started. This meant being on duty during bombing raids. It was a dangerous job made more difficult when phone lines were cut and roads blocked.

It was the role of every citizen to fight fires. Training was given in how to use portable stirrup pumps, sand and long handed shovels to extinguish or remove incendiary bombs.

Fire watching became compulsory after January 1941. It could be a cold, boring and dangerous duty. Watchers waited for hours high up on rooftops with a map and binoculars.

Preparation was key. If the watchers took cover during the bombing, fires could quickly become established.

The Auxiliary and National Fire Services

The Auxiliary Fire Service (AFS) was formed in January 1938. Fire stations were set up in schools, garages and factories. Its role was to support local fire brigades.

The AFS was also aided by over 400 men who volunteered from Canada to form the Corps of Canadian Fire Fighters. They arrived in the UK in May 1942 and manned stations in London and the South West.

AFS firewomen carried messages, supplies and food. Firewoman Gillian Tanner drove a petrol lorry through burning London to supply water pumps with fuel. For her bravery she received the George Medal for her "coolness and courage" during "intense bombing" on 20 September 1940 (TNA HO 250).

Small fires could be put out with buckets of sand. Larger fires were more challenging. They had to be fought from a distance with large quantities of water but the water also damaged the buildings and could be in short supply.

If the bombing damaged the mains supply, water had to be pumped from rivers or from specially built reservoirs. A street dam with 5,000 gallons of water had only enough water for one pump and two jets for 10 minutes (Wallington, 2007, 96).

Sometimes fire fighters deliberately made smoke so the flames could not be seen by enemy bombers - not to save the burning building, but to prevent others from being bombed.

It was a lonely feeling on top of the turntable ladder. One could look around at the fires everywhere and you would notice a few flames flickering in a building and within minutes it would be ablaze from end to end.

Unexploded bombs were categorised in order of priority:

A1: Immediate disposal essential. Detonation of the bomb in situ cannot be accepted on any terms.

A2: Immediate disposal essential. Bomb may, if the situation demands it, be detonated in situ.

B: Rapid disposal urgent, but less urgent than A.

D: May be dealt with as convenient.

Sites that were priorities were factories, gas and oil supplies, and communications. UXBs in residential areas were left for 72 hours for the electric charge in the detonator to dissipate. This could cause terrible disruption as the presence of an unexploded parachute mine could mean that an area of up to 100 acres had to be evacuated (Owen, 2011, 164).

Bomb disposal had two parts: finding the bomb and making it safe. It was the role of military engineers, known as sappers, to discover the bombs. This often meant digging up to 50 feet down, shoring holes and pumping water.

Men dug bombs out in terrible conditions knowing that a small mistake or misfortune could detonate the bomb. Once the bomb had been uncovered, they had to decide whether to defuse it on site or move it to a place of safety. In London, bombs were taken to places like Regent’s Park to be safely dealt with.

Bomb disposal experts either had to battle with fuses and anti-tamper devices or pump the explosive charge out of the casing using steam. In the Royal Engineers the joke was:

Join the army to see the World - join Bomb Disposal to see the next one.

From November 1940, conscientious objectors from the Non Combatant Corps were accepted and over 450 volunteered for bomb disposal.

It is impossible to estimate how many buildings were saved by the efforts of citizens during the war. Some high profile examples such as St Paul’s Cathedral are well documented. Others such as the headquarters of the National Union of General and Municipal Workers in Birmingham were less remarkable.

Across the country, local civilians and volunteers joined members of the armed forces every night to try to keep their towns and cities safe. Official statistics show that bombing damaged and destroyed 3.75 million houses across the UK during the war (TNA HO 198/243). Rebuilding the nation’s housing stock was to be a major task in the post-war era.

St Paul’s Cathedral was a vulnerable target. Its remarkable survival was due, in no small part, to the dedication and bravery of some heroic people. 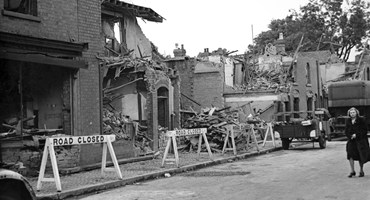 One of the most heavily bombed cities, subject to successive raids, Birmingham buildings that were saved one month could be destroyed the next. 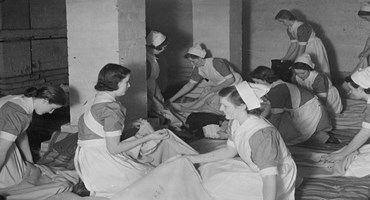 How did the Second World War change the lives of women on the Home Front?

Teaching Activity looking at how the Second World War change the lives of women on the Home Front.