6 June 2019 marks 75 years since the start of allied invasion of Nazi-occupied Europe. To commemorate the event, we’ve partnered with the D-Day Story Museum in Portsmouth to look at some of the objects in their collection that bring the events, places and people from those momentous days to life. Each one illustrates the complexity and reach of the D-Day preparations. We also explore some newly protected D-Day sites and other projects that will lead to a better understanding of D-Day heritage.

D-Day also known as "Operation Overlord- had not sprung from nowhere. This was a huge and complex operation involving over 156,000 troops and many more service people from the Allied nations and had been many months in preparation.

Though the effort was national, Portsmouth and the south coast were particularly vital: the city and its surrounding areas housed thousands of troops in the lead up, as well as the Supreme Allied Commander, US General Dwight D. Eisenhower.

Before D-Day, Special Operations Executive (SOE) agents were sent out to support resistance networks that were gathering intelligence about German defences and troops and preparing to go on the offensive against the occupiers. The agents were flown out from RAF Tangmere in West Sussex.

The main means for SOE agents and the Resistance to communicate with London was using radios such as the one from the D-Day Story collection below.

The complex D-Day campaign needed a number of command centres to direct operations.

Fort Southwick, near the naval base of Portsmouth, housed a secret communications underground centre for coordinating combined operations of the different services, dug 100 feet below the fort. It was staffed by personnel from the army, navy and air forces. In particular the work of plotting movements on a large map table was done by members of the Women's Royal Naval Service ('the Wrens') and the Women's Auxiliary Air Force (WAAFs). Their role was encapsulated in an unofficial coat of arms that was displayed in the plotting room.

Realistic training, often in areas that resembled the target beaches, was a key part of D-Day's success. One such place was the Assault Training Centre at Braunton Burrows in Devon. Recently listed facilities here included dummy landing craft and a bazooka firing practice wall

However there were also tragic losses during these exercises.

Six weeks before D-Day in April 1944, troops arrived at Studland Beach in Dorset to rehearse an assault codenamed ‘Exercise Smash’. This was watched by Prime Minister Winston Churchill, King George VI and  General Eisenhower from Fort Henry, an observation post built on a small cliff overlooking the bay.

The Duplex Drive (DD) Valentine tank was designed to be amphibious, however during Exercise Smash, six crewman were killed and seven tanks were lost shortly after driving off their landing craft. They ran into immediate difficulty when a sudden change in the weather adversely affected sea conditions. A valuable lesson was learned that these tanks couldn’t survive being launched too far from a beach.

The Valentine tanks in Poole Bay represent the largest surviving group of their type anywhere in the world and this group has been made a scheduled monument.

Historic England and Wessex Archaeology have also been carrying out underwater surveys of two large American vessels known as Landing Ship, Tanks (LSTs) that were sunk as part of the ill-fated Exercise Tiger D-Day practice landings at Slapton Sands in Devon. The ships were carrying hundreds of American servicemen as well as tanks, vehicles and trucks and they were torpedoed as a result of nearby German E-boats intercepting their communications, resulting in the deaths of around 800 men. Working with the US Navy and Royal Navy, it is hoped that the survey work will help inform whether the ships can be granted protection by the Department for Digital, Culture, Media and Sport later this year.

New Forest troop camps included Camp B7 or 'Brockenhurst A' at Brockenhurst Park. These camps were mostly hidden in woods in case of enemy aerial reconnaissance. Camp B7 held 1,110 troops and 159 vehicles, while Camp B8 or 'Brockenhurst B' was a short distance to the south and had the same capacity.

Each camp had some permanent personnel, as well as the troops who passed through on their way to Normandy. For example Joan Fitzpatrick (later Mrs Joan Malthouse) was a member of the Navy, Army and Air Forces Institutes (NAAFI) who worked at camp B7, living in a tent. NAAFI personnel were sealed into the camp prior to D-Day, to ensure all intelligence about D-Day was kept safe. You can see the cap badge that she wore on her NAAFI uniform.

The Allied armies were highly mechanized and so needed a steady supply of fuel. The creation of 'PLUTO' -Pipeline-Under-the-Ocean, an ingenious solution, avoided the dangers posed to oil tankers by the weather or German attacks. About 8 percent of Allied fuel came through PLUTO and the Pluto power station at Browns golf course, Isle of Wight is Grade II Listed.

In addition to fuel, the invading armies and fleet comprised of hundreds of ships were kept supplied with food and ammunition through supply bases such as The Royal Clarence Victualling Yard, Gosport.

The night duty officer's log book records that the night of 6-7 June was quiet, as most Allied ships were at the other side of the English Channel or on their way back to the UK. The Yard soon got much busier as vessels began to return to the UK and needed resupplying.

One of the greatest logistical challenges facing the Allies was access to appropriate harbours once in Normandy. Previous action had shown that trying to capture a port intact that was defended by the enemy was likely to end in disaster.

The solution was to create an artificial pre-fabricated harbour, codenamed 'Mulberry' that could be built in sections and towed across the channel. The Mulberries consisted of four major component parts and each had a codename: Gooseberry (a network of artificial breakwaters), Bombardon (floating breakwaters), Whale (floating piers) and Phoenix (sunken breakwaters).

A number were built at King George V Dry Dock, Southampton as well as other locations in the region.

Some elements of the Mulberry harbours remain in English waters. For example a reinforced concrete caisson component, like a large rectangular boat hull, lies off Littlestone-on-Sea in the Straits of Dover and was made a Scheduled Monument in 2013. This component that had been 'parked' there could not be refloated in time for D-Day.

Two other Phoenix Caisson components, one inner caisson and one outer caisson at Pagham Harbour, West Sussex have recently been made Scheduled Monuments.

After training and having passed through the marshalling camps and other camps closer to the coast, the troops headed for the final preparation stage on the English side of the Channel: embarkation on ships to take them to Normandy.

South Parade Pier was one of several locations in the Portsmouth area that were used to load troops onto the landing craft that would take them to Normandy. To increase the pier's loading capacity, a temporary pier was built from scaffolding and planks on the east side of the main pier. Only troops on foot loaded here, and there were other sites nearby that were suitable for loading vehicles.

Embarkation and landing was governed by loading tables for the various units, you can see an example in the image below.

Gosport also played a vital part in embarking troops- and in bringing back the wounded and Prisoners of War. This included using specially constructed concrete slipways known as 'hards'. Historic England has recently surveyed a group of embarkation hards in the area of Stokes Bay.

Not all the crossings went smoothly to plan. For example a landing craft carrying tanks and armoured bulldozers intended to support Canadian troops on Juno Beach broke down, capsized and subsequently was deliberately sunk off Selsey Bill, West Sussex. The lost vehicles have recently been scheduled.

D-day planners had feared huge casualty rates for the initial assault. Whilst the number of casualties on D-Day was fortunately lower than expected, thousands were killed or wounded on the beaches and the subsequent battle for Normandy was very bloody.

Lives were also lost at sea as Allied ships crossed the Channel repeatedly to bring troops and supplies to the Normandy campaign. Many British navy personnel who were lost at sea in the Normandy campaign are listed on the Portsmouth Naval War Memorial on Southsea Common. Naval losses continued into August 1944, two and a half months after D-Day. Sub Lieutenant William Longley was one of the crew of Landing Craft Flak (LCF) 1, which was sunk by a German torpedo on 17 August 1944 and is remembered on the war memorial.

Many other service people are commemorated at military cemeteries in France.

Part of the German response to D-Day was to attack Britain with V-1 rockets, with the intent to harm civilians but also to disrupt the movement of troops and supplies to France.

The British effort to counter the rockets were codenamed 'Operation Diver' and included using ground batteries, barrage balloons and aircraft to intercept them. RAF West Malling in Kent was the principal fighter station for this operation.

The German propaganda machine made exaggerated claims about the effectiveness of the V-1 attacks, these claims were included in propaganda leaflets dropped over allied troops.

Historic England has commissioned a book telling the full story of 'Operation Diver'. 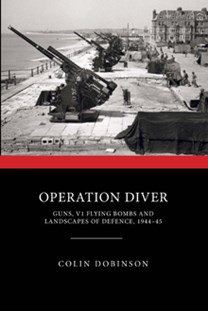 The story of the military campaign against the V1 flying bomb – unique in both military and landscape terms.

Map of the D-Day Story Enriching the List contributions

Find out more with D-Day UK: 100 Locations in Britain

If you are intrigued by this brief look at the D-day campaign and would like to find out more, this new Historic England book choses 100 locations in Britain to tell the story of how the invasion of France came about. 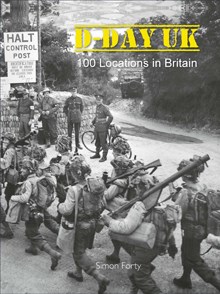 The first survey of places in Britain associated with D-Day.

Visit the D-Day Story Portsmouth home to a collection of over 10,000 items that tells the story of D-Day and the Battle of Normandy through the personal objects and accounts of people who were there. It was recently shortlisted for the prestigious European Museum of the Year Award 2019.

Landing crafts, tanks, bulldozers and floating harbours are listed to mark the 75th anniversary of D-Day. 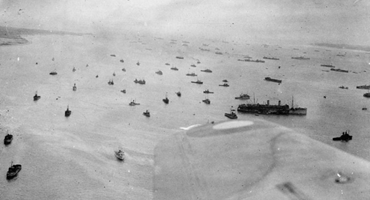 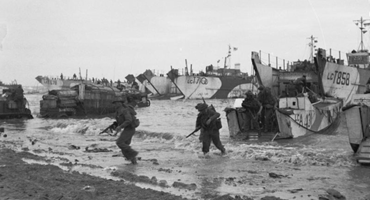 D-Day 75 Years On: How the Allies Prepared

Blog on the D-Day preparations 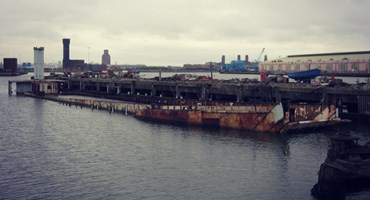 This blog focuses on the remains of Operation Neptune, the cross-Channel assault phase of the invasion Operation Overlord 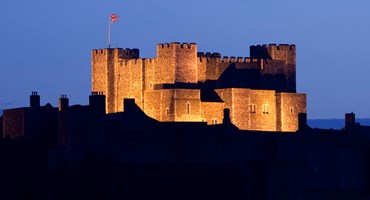 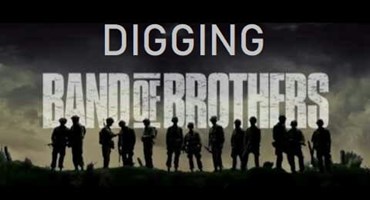 Excavating the camp of Easy Company of the 101st Airborne