Our Travel & Tourism category judge, Dr Bettany Hughes, has chosen the following ten places (from a long list of public nominations) to tell the story of travel and tourism in England. Listen to our podcast series or read more to find out why.

A History of England in 100 Places is sponsored by Ecclesiastical

5. What did the Romans do for travel & tourism?

The geothermal springs were the reason Bath developed as a city and this site has been a destination for tourists and travellers for thousands of years. The first shrine here was built by the Celts and the Romans worshipped the deity Sulis Minerva here. The great Roman buildings fell into disrepair and were built over after the Roman withdrawal, only to be rediscovered in the late 19th century.

Bath was rejuvenated as a spa town in Georgian England and pump rooms were built around the springs. Fashionable society visited the city to bathe in the reputably healing hot springs and drink the supposedly curative spa water. Notable visitors to Bath and its spa include Jane Austen, Charles Dickens, Thomas Gainsborough, William Pitt the Younger and Lord Nelson.

Read the List entries for the Roman Baths and Pump Room

The Fosse Way, Exeter to Lincoln

After the Roman invasion of Britain around 43AD, the Romans quickly built a road network of paved and gravel roads in a land where unpaved tracks were previously the norm. The network was around 15,000km in length, linking key military and administrative locations.

Fosse Way was one of the most important Roman roads in the country and one of the longest, running from Exeter to Lincoln. The A46 follows the old road almost exactly from Leicester to Lincoln and some of the route survives as road or path south of Leicester and through the Cotswolds.

This claims to be the oldest inn in England, with its establishment stated as 1189. The word trip formerly meant stopping point on a journey, suggesting the inn was originally used by travellers, pilgrims and crusaders on the epic journey to Jerusalem. The inn is built beside and into the sandstone rock upon which Nottingham Castle stands.

Among the curiosities inside the inn are a wooden chair which is said to increase the sitting woman’s chances of becoming pregnant and a model galleon in a glass case, which is cursed so that anyone who has dusted it has met a mysterious death.

This was the home to William Brewster, one of the Pilgrim Fathers who journeyed on the Mayflower to New England in 1620. Brewster was among a group who, in 1606, broke away from the established church after becoming dissatisfied with the corruption in the Church of England. Called the Separatists, they wanted to live a simpler life based on the Bible teachings. Brewster opened up his home, Scrooby Manor House, as a meeting place for the new congregation.

The separatists were severely censured and a small group of them, led by Brewster, left for the New World in 1620. The influence of the small, idealistic colony they set up when they landed in Provincetown can still be seen in the beliefs of America today and has had a lasting impact on the world.

Spanning the River Skerne in the centre of Darlington, this bridge still carries daily railway traffic, making it the oldest railway bridge in the world in continuous use. In 1825 when the Stockton & Darlington Railway opened, Locomotion No. 1, built by George Stephenson, passed over the bridge and began the railway age which was to change Britain and the world.

For a time the bridge was on the back of the £5 note. The railways changed England forever, connecting distant towns and counties to each other and bringing the population closer together.

Although only the third highest peak in England, to many Helvellyn is the most enigmatic and evocative of the Lake District fells. With a commanding position between Ullswater to the east and Thirlmere to the west, Helvellyn has attracted hikers since it became a popular pastime in the area in the late eighteenth and early nineteenth century.

The Lake District, as well as being a place where people live and work, is also one of the most beautiful areas in England and has long been a destination for travellers and tourists alike.

Although Butlins, Pontins and Warners became popular, well known holiday camps in the mid twentieth century, they were certainly not the first of their kind. Caister Camp, close to the old Roman fort in the town near Norfolk, was one of the earliest holiday camps to use hut or chalet based accommodation that holiday camps became famous for.

Caister’s camp was established on the Norfolk coast by John Fletcher Dodd in 1906, 30 years before Billy Butlin founded his inaugural camp in Skegness in 1936. Dodd was a tee-totalling grocer who fell in love with the area when he visited. He bought a small house there, put up some tents and the park was born. Dodd was a socialist and founding member of the Independent Labour Party and so initially this was a socialist holiday camp.

Influential characters from the Labour party would come there, including George Bernard Shaw, and all guests were expected to help out with the chores.

Opened in 1869, Clevedon Pier was built to receive paddle steamer passengers from Devon and Wales. A spectacular vestige of a Victorian seaside resort, it was constructed using Barlow rail tracks and is approaching its 150th anniversary.

It is the only accessible Grade I listed pier in the country and was described by the poet John Betjemen as “the most beautiful pier in England”.

One of Britain's oldest surviving amusement parks and home of the UK's oldest operating roller coaster, the Grade II* listed Scenic Railway. The site of Dreamland (as it was re-named in 1920) dates back to the British railway boom and the early 1870s when, in its original form, the ‘Hall by the Sea’ was operated by a circus tycoon, the self-proclaimed “Lord” George Sanger.

When completed in 1867, The Grand Hotel was one of the largest hotels in the world, as well as one of the first giant purpose-built hotels in Europe, and now at over 150 years old it still welcomes visitors.

The building is designed around the theme of time: four towers to represent the seasons, 12 floors for the months of the year, 52 chimneys symbolise the weeks, and originally there were 365 bedrooms, one for each day of the year. The hotel itself is in the shape of a 'V' in honour of Queen Victoria.

Read the List entry for The Grand Hotel, Scarborough

Add your knowledge to the National Heritage List for England

Research into the heritage of England's railways, canals and roads

Where is the Oldest Surviving Railway Tunnel in the World?

Buried under the modern tarmac is a tunnel built in 1793 by Benjamin Outram (1764-1805) as part of the Butterley Gangroad railway line.

Surviving with its petrol pumps intact, the West End Garage in Turnastone, Herefordshire is one of the earliest of these and is now Grade II-listed. 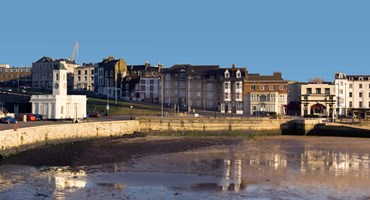 If you are a fan of history or heritage, there's always something going on or somewhere new to visit.

Historic England is committed to carrying out social and economic research in order to help us to understand the value of heritage.