A History of England in 100 Places is sponsored by Ecclesiastical

Stonehenge, Canterbury Cathedral, a holy well and a London mosque are among 10 places chosen which bring England's extraordinary history of faith and belief to life.

25. Stonehenge, Lindisfarne and a holy well

27. Fountains Abbey and a Jewish cemetery in Cornwall

28. Quakers in Yorkshire and a Mosque in the heart of East London

Stonehenge and its landscape, Amesbury, Salisbury

Stonehenge is one of the wonders of the world. It has been a place of deep significance and spirituality to humans for thousands of years. The stone circle is aligned with the rising and setting of the sun at the solstices, but its exact purpose remains a mystery. Its great stones were raised more than 4,000 years ago and its banks and ditches are older still. A huge and extraordinarily well co-ordinated communal effort was needed to carry the stones sometimes hundreds of miles by land and water, and then to shape and raise them. But the stones themselves are only a small part of a huge, prehistoric ceremonial landscape, dotted with ancient burial sites, which was of immense spiritual significance to our ancestors.

This small but special island, separated from the mainland at certain times of the day by the tide, was highly influential in shaping English Christianity. The monastery of Lindisfarne was founded by Saint Aidan in 635 and he, along with the monks he arrived with from Ireland, had two main purposes: to evangelise the North of England and to copy the sacred texts and histories of the early Church. One of the most important fruits of this labour is the breathtaking Lindisfarne Gospels, an illuminated manuscript, probably written for the shrine of St Cuthbert in Durham Cathedral. Cuthbert was a monk who reformed the religious practices at Lindisfarne and later rose to be the Bishop. His story is deeply entwined with Holy Island and Durham, where his remains were laid to rest. Lindisfarne has had a turbulent past. In the century after the Lindisfarne Gospels were produced it faced an early Viking invasion and later its 12th century monastic buildings became one of the first to be sacked in King Henry VIII's dissolution of the monasteries. Holy Island is also significant for its connection to The Venerable Bede, who spent some time there. Bede did much to make the Latin and Greek writings of the early Church Fathers more accessible to his contemporaries. His monastery at nearby Jarrow was a bright light of learning in Dark Age Europe and his Ecclesiastical History of the English People gained him the title "The Father of English History".

Few buildings in England demonstrate an openness to different faiths like Brick Lane Mosque. The building's first incarnation was as a Huguenot (members of the Protestant Reformed Church) Chapel in 1743 for French Huguenots. They set up a silk weaving community in the East End after fleeing King Louis XIV's restrictions on their religious freedom. When the Huguenot community moved to the suburbs, Jewish people from Eastern Europe came to the area, escaping religious persecution like the Huguenots before them. The Spitalfields area of London has been a refuge for various immigrant communities over many centuries. An evangelical Christian society occupied the building for much of the 17th century and Wesleyan Methodists in the 18th century. But as the Jewish East End population continued to rise, they needed more places to worship and transformed the building into the "Great Synagogue". The Jewish population later began moving out to the suburbs and Bangladeshi Muslims came to the area after the Second World War, working in the existing textiles industries and bringing curry to the famous Brick Lane. In the 1970s the building was transformed into a mosque, as it remains to this day, distinguished by its sculpture-like minaret.

This is known locally as Greensted church and, like so many of England's parish churches, it is a building of incredible age which, generation after generation has been used, loved and shaped. Buildings like this one have been community hubs for hundreds of years and are reservoirs of history for the people who use and visit them. Saxon, Norman, Tudor and Victorian builders have all made their mark on Greensted church in some way. This is also the oldest known standing wooden building in England and one of the oldest surviving wooden buildings in Europe. It is extraordinary because its main walls are made up of half tree trunks standing next to each other. There is no other church like it in England.

This is the seat of the Archbishop of Canterbury, the leader of the Church of England, and is the capital of English Christianity. Canterbury tells of how the Roman Catholic Church came to England when the monk Augustine arrived on our shores in 597AD. Nearby St Martin's Church is also part of the World Heritage Site. It is the first church founded in England and claims to be the oldest parish church in continuous use. One of the church's major draws is the story of Thomas Becket, who was murdered in 1170 after a chase through the cathedral, by four men who believed Henry II wanted him dead. A shrine to Beckett, built soon after his death, has been an important destination for pilgrims for hundreds of years, as encapsulated in the Canterbury Tales, and still draws floods of visitors today.

This cemetery was founded in about 1780 on the south coast of Cornwall to serve the growing local Jewish community. During the mid-18th century Jewish people began to move away from London into the farther reaches of England. As Falmouth was one of Cornwall's more urban areas it was an attractive base to settle and start to trade. A silversmith called Alexander Moses, otherwise known as Zender Falmouth, settled here in 1740 and petitioned for 20 years for a Jewish Cemetery to be founded because the number of Jewish families settling in the area had flourished. Beside it is a Congregationalist cemetery, which was founded in the same year for the local Congregationalist population. The fact they were established next to each other tells us how society was increasingly accepting minority religious groups outside of the Established Church during the 18th century. They are not only an important reminder of how different faiths commemorate their dead, they can also tell us about the growth and change in England's religious communities and how this shaped the country.

See the List entry for the Jewish cemetery at Penryn

Lady’s Well, near the village of Holystone, Northumberland

This tranquil well, fed by a natural spring in rural Northumberland, is an atmospheric and peaceful spot steeped in religious tradition. People as far back as Roman times have used this well and a Roman road beside the spring runs from the fort of Bremenium Redesdale. Hundreds of years on, in the 5th century, a Celtic missionary called St. Ninian is said to have baptised people in this pool. And in 625 St. Paulinus arrived in the north of England, converted the Northumbrian King Edwin to Christianity and is said to have baptised a further 3000 people at Lady's Well during Easter week in 627. The great flat stone at one end of the well, used for baptisms, gave the nearby village of Holystone its name.

There are more than 330,000 Sikhs living in the UK today, all belonging to the community known as the Khalsa. The UK's Sikh population grew in the 1950s and 60s when Sikhs from Punjab in Northwest India sought work and life abroad, following divisions caused by British colonial rule of India and the trauma of Partition. Many Sikhs came to Britain to settle in areas like London, Birmingham and West Yorkshire, taking on industrial work. Smethwick's Gurdwara houses one of the largest congregations in the UK and is the biggest Gurdwara in Europe. Built in the 1990s, it continues to expand with Smethwick's growing Sikh population. Community is at the heart of the Sikh faith and Gurdwaras are a focal point for communities to come together and get closer to God.

Farfield is one of our oldest Quaker meeting houses. It was built in 1689 on land donated to the Quakers by a sympathetic Yorkshire landowner on a 5,000 year lease. Throughout the 17th century Quakers were regularly prosecuted for blasphemy and fined or imprisoned. George Fox, the main protagonist of the movement, turned his back on the Established Church, saying that anyone can have a direct relationship with God and there was no need for priests or churches. Instead 'Friends' met together for silent worship in all kinds of places, from barns to hilltops. Intolerance and persecution were constant threats until the 1689 Act of Toleration, which allowed non-conformist groups religious freedom and meant they could build their own places of worship. Like most Quaker meeting houses, Farfield is a deliberately simple, functional building. Usually built by local craftsmen, they sit modestly within their local landscapes, reflecting the Quaker principles of modesty and tolerance. Today this humble little building is most regularly visited by walkers on the Dales Way in the Yorkshire Dales National Park. It remains a special place for quiet contemplation, or to shelter from the weather.

Fountains Abbey was once a religious powerhouse that created and transformed this community between the 12th and 16th centuries. It was founded by a group of 13 monks from York in 1132, who had grown weary of the city life and sought escape in this sheltered valley. The Abbey is one of the largest and best preserved ruined Cistercian monasteries in England. It allows us to step back into a rich and dramatic past, telling us how Cistercian monks lived and how the system they created was destroyed in the reformation. The size of the abbey grounds was a great responsibility and the monks had to bring in additional helpers, or lay brothers (giving us the word labourer) to help work the land. The Abbey became very wealthy through industry, including wool production, lead mining, cattle rearing, horse breeding and stone quarrying. In 1539 Fountains was abruptly closed down during Henry VIII's Dissolution of the Monasteries.

Add your knowledge to the National Heritage List for England

Where Was Britain's First Recorded Mosque?

The earliest recorded mosque in Britain was founded in a Liverpool terrace house in 1889.

This section covers Historic England current and planned research into faith buildings and commemoration of the dead at cemeteries. 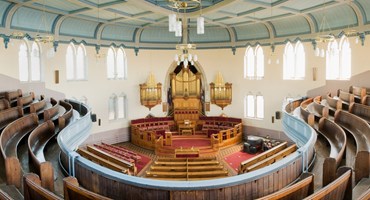 Find out how we can help you to look after your place of worship, from churches to mosques and synagogues to temples.