A century ago, at the height of the First World War, excessive drinking was thought to be a threat to munitions production. To counter this, the government took the drastic step of nationalising public houses. Historic England carried out an architectural survey of the State Management Pubs and the scheme's influence on pub design.

'The greatest of these deadly foes is drink'

The efficient manufacture of munitions was vital to the war effort. By 1915 the authorities were deeply concerned that excessive drinking by the workforce was taking its toll on productivity.

In March of that year, David Lloyd George, later Minister of Munitions, even went so far as to declare 'We are fighting Germany, Austria and drink, and so far as I can see the greatest of these deadly foes is drink'.

The problem was particularly bad near Gretna, where construction work on a nine-mile long cordite factory began in November 1915. Production at Gretna began in April 1916 and the builders and workers at HM Factory Gretna were well paid.

These workers had nowhere to spend their money except in pubs, particularly in Carlisle, just a short train ride away. Alcohol abuse and drunken disorder became common in the city and led to absenteeism and poor productivity at the factory.

To combat this, the Carlisle-Gretna district was one of several areas where state ownership and control of the drinks trade was introduced, known as 'The Carlisle Experiment'. Other areas included Enfield Lock in Middlesex (now Greater London), the location of the Royal Small Arms Factory, and Cromarty Firth in Northern Scotland.

The scheme began in Carlisle in 1916. The state set about nationalising all the breweries and over 300 pubs and licensed premises in Carlisle, Gretna, Silloth and a large part of rural north Cumbria, as well as in a small part of Scotland close to the border. The scheme was later introduced in the area around the coastal town of Maryport.

The scheme's key aim was to keep vital munitions workers sober by restricting the supply of alcoholic drink. At the same time as closing a large number of existing pubs, it introduced new rules to moderate consumption and behaviour, and promoted the sale of food as well as alcohol in the pubs which stayed open.

On 12 July 1916 The Gretna Tavern opened on Lowther Street in Carlisle. It was the first pub to be opened by the Carlisle State Management Scheme.

The alcohol content of the drink on sale was reduced and prices were increased. New pub managers, effectively civil servants, replaced landlords and were paid a salary with no extra profits available from increasing sales.

Advertising was removed from the outside of Carlisle's pubs with only simple name signs allowed. This was one of the most visible acts of the State Management Scheme as illustrated by the gallery of photos below of the Golden Lion on Botchergate and the Carlisle Arms on English Street.

Built in the first half of the 19th century, the Golden Lion pub was acquired by Worthington’s in 1897 and, as the photograph below shows, the brewery was not shy about advertising either its brand or its wares. 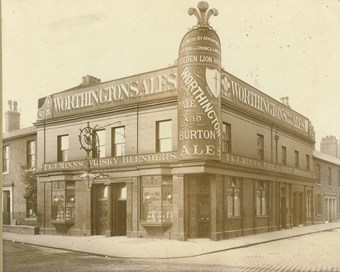 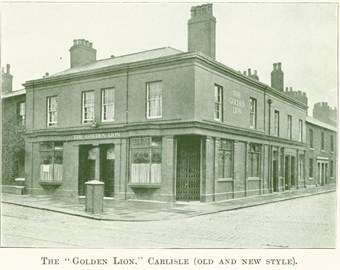 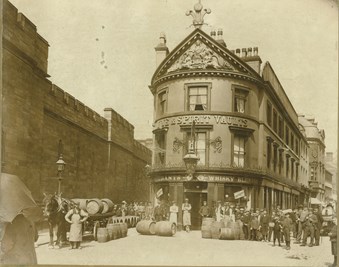 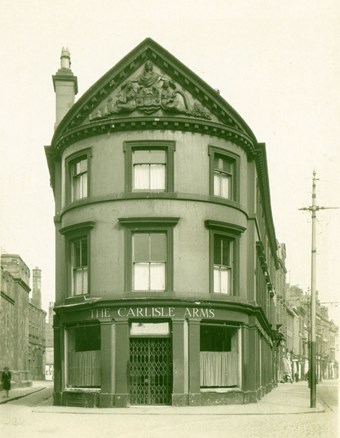 Seven new food taverns were also opened by the scheme, intended to be model refreshment houses. The first of these was the Gretna Tavern, opened in what had been the town's main Post Office following the conversion of the Athenaeum as an extension to it in 1874.

In redesigning the scheme’s pub interiors, Harry Redfern, the scheme's chief architect, sought to do away with multiple small rooms and open pubs up into single, large, easily supervised spaces.

The photo below shows the ground-floor bar of The Pheasant, Church Street, following conversion into a restaurant-public-house for working people. Prior to conversion, The Pheasant was a beer house with very small rooms to which two cottages and a small shop were attached.

A ‘Working Girls’ Café’ was created on the first floor of The Pheasant which sold cheap hot meals at lunchtime and was very popular with local mill girls. There were also reading and writing rooms on both the first and second floors.

By the end of the war, the scheme had proved so successful in Carlisle that the Government decided to keep the pubs in state ownership and extend the programme of public-house reform further.

Under the direction of Harry Redfern, a new programme of pub building began and, free from competition and the constraints of magistrates and planners, experimentation with unorthodox layouts and facilities was possible.

The result of this was the evolution of Redfern's 'New Model Inn', 15 of which were built in the wider Carlisle district, and which greatly influenced the design of pubs throughout the country. The Carlisle and District Scheme continued until its abolition by Act of Parliament in 1971.

You can read more about the state control of public houses in our research report on the subject.

The English Pub
Countering the ‘deadliest of foes’: public houses of the Central Control Board and the State Management Scheme, 1916-73