Skip to main content
Share this page
Share
Harwich, Essex, this innovative roll-on/roll-off (Ro-Ro) bridge was erected at the Port of Richborough in 1916 to speed up the supply of war material to the western front. It was later moved to Harwich, Listed Grade II. © Historic England DP165499 Pat Payne

Throughout the war the railways were the quickest way of moving people and goods around the country and most places had ready access to a railway station. Despite their vital role there was relatively low investment in the railway system.

In some areas, especially around London, short connecting lines were built to allow the railway system to function more efficiently. Railways were crucial for conveying troops and their equipment and many camps were provided with new branch lines and sidings as were new munitions factories. Canal transport remained important to local economies, but similarly suffered from a lack of investment.

Hostilities brought an end to civilian cross-channel shipping and many ferries were requisitioned as troop transports and hospital ships, and some were painted in dazzle camouflage to confuse U-boat crews. Dover and Folkestone were two of the most important embarkation ports. At Dover, the new and nearly completed Dover Marine station was pressed into service for troop embarkation and receiving the wounded. In recognition of its role the South Eastern and Chatham’s Railway’s war memorial was placed at Dover, it and the station are listed Grade II. At Richborough, Kent a new port was built and included the world’s first roll-on roll-off rail ferry; the connecting rail bridge survives at Harwich, and is listed Grade II.

On the roads the requisitioning of draft horses for the army reduced the amount of freight that could be carried. Mechanised road transport was in its infancy, although steam wagons, and petrol and diesel lorries were increasingly used for shorter journeys. Post-war the sale of surplus military vehicles greatly accelerated this trend. 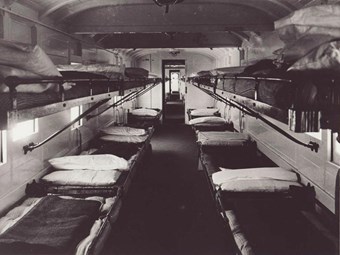