Finalist for the Best Heritage Research, Interpretation or Recording award at the Historic England Angel Awards 2018.

For many people, the history of Coventry is synonymous with the devastation of the second world war. The Blitz and post-war reconstruction are widely perceived to have erased all traces of medieval heritage, but in fact Coventry has a rich surviving medieval history that few people know about. Mark Webb is making it his mission to bring this history to as wide an audience as possible using a mix of traditional and innovative methods.

“The second world war and post-war reconstruction have tended to overshadow other eras in Coventry’s history,” says Mark Webb, who is completing a PhD in medieval history at the University of Leicester. “A lot of the city’s medieval heritage history has been overlooked, partly because of the huge changes that have taken place in the landscape of the city over the last 80 years.”

But while this gap in knowledge has widened as cuts have left few heritage professionals who are able to talk about the era, the Medieval Coventry charity that Mark Webb co-founded is behind a raft of initiatives bringing Coventry’s rich heritage to life. Although “medieval” covers the period between the Norman Conquest in 1066 and the Dissolution of the monasteries around 1540, the charity’s research focus is mainly on the period from approximately 1360 to 1540 when Coventry was England’s fourth largest city with wealth based on wool and woollen cloth.

“Coventry was actually a Saxon town and so strictly speaking Earl Leofric and Lady Godiva fall just outside our focus,” he says. “But there is an even more interesting and less well-known story to tell about Coventry’s heyday from the mid-14th to the mid-16th centuries when it was the ‘boom town’ of England and the seat of royal power.”

Medieval Coventry is determined that this nationally significant heritage should be better known and its volunteers are employing an array of techniques to spread the word. Mark Webb is working with the Herbert Art Gallery & Museum to gain Arts Council England designation for the city’s medieval documentary archive and archaeological collection, allowing this to be digitised.

Mark is also raising funds to get some of the backlog of important past archaeological excavations published and has compiled a comprehensive inventory of the city’s surviving architecture, art, archaeology and archives. He leads walking tours and talks around the city including at universities and schools. Last year he and his fellow experts in the Coventry Medieval Group organised a successful conference that displayed some of the Herbert Museum’s medieval archive and gathered specialists from the UK and abroad to discuss new research on the city.

Medieval Coventry also partnered with the University of Oxford to put on a display of their research into the fascinating connection between Queen Isabella of France and Queen Margaret of Anjou and Coventry in the 14th and 15th centuries. The display was held during Heritage Open Days at the historic Grade II* listed Drapers Hall, which has been closed to the public for the last 30 years.

Among other projects, the group is also using the latest technology to spread the word about medieval Coventry and ignite passion for the city. In collaboration with the Department of Visualisation at the University of Warwick, the charity is creating a virtual reality model of Spon Street, located to the west of the medieval city, that deploys the latest multi-sensory technology used in the car industry. Viewers will be able to walk through the medieval crafts and industrial area and experience the sights, sounds and smells of tanning, weaving and dyeing.

Mark Webb is also developing a new self-guided walking tour app will take participants to waypoints across the site of the medieval city where they’ll encounter beautiful medieval buildings in the midst of the urban landscape. They’ll see long-lost medieval streetscapes that were captured more than 100 years ago in stunning watercolour paintings, prints, engravings and photographs from the Herbert Museum’s rarely seen collection.

A recent series of heritage open days at the city’s Drapers Hall focused on the Royal Women of Influence in Medieval Coventry: Queen Isabella and Queen Margaret of Anjou.

Mark Webb is passionate not only about preserving Coventry’s history but also promoting it. It is hard to imagine a more committed or effective advocate for his city and its heritage, or a more innovative and varied approach to sharing knowledge about medieval history. Through this approach, Medieval Coventry has helped the city’s surviving medieval art and architecture, archives and archaeology to be recognised as of national significance, and this recognition is set to grow when Coventry takes over as City of Culture in 2021.

After Coventry’s successful bid for the honour was announced in December 2017, Mark Webb spoke about being involved in the application process. “Coventry is the city of my birth, and I have always thought that its heritage has been overlooked for too long. When people think about Coventry, they refer to the Blitz, post-war redevelopment and the motor car industry.

These are important subjects, but Coventry has so much more to offer. It is exciting to be able to be part of the process that will showcase Coventry’s nationally important medieval heritage to the world.”

Finalist for the Best Heritage Research, Interpretation or Recording award at the Historic England Angel Awards 2018

Pete Insole for Know Your Place

Winner of the Best Heritage Research, Interpretation or Recording award at the Historic England Angel Awards 2018 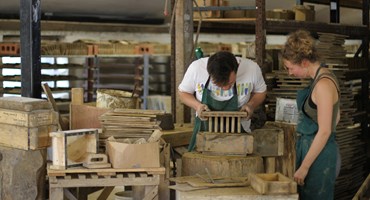 Best Craftsperson or Apprentice on a Heritage Rescue or Repair Project

This award recognises a craftsperson or apprentice who has demonstrated craft skills that have been key in repairing or rescuing a historic site.