Recent guidance on methods to protect and manage archaeological sites during development has been informed by research.

When archaeological sites are discovered in advance of development, options for dealing with them include excavation before construction begins, moving the building to a different location, or trying to find a design solution that allows the archaeological remains to be retained beneath or adjacent to the new structure.  Which method is chosen will depend on the significance of the site as well as engineering practicalities; the choice will ultimately be made by the local planning authority, with input from their archaeological advisors.

As archaeology is a finite resource, past and current planning guidance puts an emphasis on the conservation of heritage assets affected by development.  For archaeological sites, that can involve preservation under new developments, a process commonly referred to as preservation in situ.

However, construction on and around archaeological remains can put them at risk, from direct physical impacts (for example from new foundations) or from changes to their burial environment which over time could cause archaeological materials to decay and information to be lost. This is a particular concern for waterlogged sites, as the presence of water in these deposits since their formation has excluded oxygen and meant that organic materials, that would normally decay, are preserved. Much of the evidence from Must Farm- see Issue 3 of Historic England Research- survived for that reason. 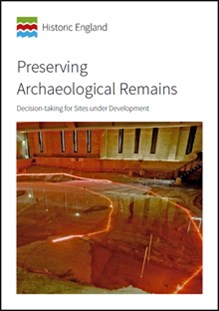 Guidance on how to preserve archaeological sites affected by development or other land-use change.

A quarter of a century of research

Now you may wonder what a story about new guidance is doing in a section of our website about research.  Whilst much of our research at Historic England is focused on understanding places, buildings, archaeological sites and artefacts, a considerable part of our research effort is also dedicated to improving management of heritage assets; in fact, the two streams of research often go hand-in-hand as it is only through understanding heritage assets and their significance that you can manage these important buildings and sites for future generations to appreciate and enjoy.

Since the late 1980s when the practice of in situ preservation was first considered and used on sites like the Rose Theatre in London (shown on the front cover of the guidance), research, much of it funded by Historic England’s predecessor English Heritage, has been carried out to understand how best this can be achieved, as it is not always a simple process.

This has involved analysis of artefacts and deposits from a range of rural and urban sites (see for example Nantwich) Information has also been collected on changes to groundwater on waterlogged archaeological sites impacted by quarrying (for example a Bronze Age log boat at Shardlow Quarry in Derbyshire, see image below), agricultural drainage, habitat creation and urban development.

Although there is still further research needed in particular areas, over the last 25 years knowledge on how to successfully preserve archaeological sites in situ beneath or adjacent to new buildings (or other types of land-use changes) has increased to the point where we now have sufficient information on which to base good practice advice.

So what does the guidance say?

The two key points in the document are

This may sound simple and sensible enough that it doesn’t require a guidance document to be produced just to spell it out.  However, in the past our tendencies have been to try to avoid too much disturbance of sites (for financial and conservation reasons), and to attempt to understand them through minimal intervention, and in the case of waterlogged sites, by measuring water levels.

We now realise that this approach doesn’t allow for a full understanding to be gained of what archaeological remains are present on site, or for an assessment to be made of how well preserved they are.  That makes taking decisions about the most appropriate methods of preservation much more difficult as, if you don’t know what condition your materials are in, you have no way of knowing what harm development proposals might cause to them in the future.

I have personal experience of this from a project I was involved in at Fiskerton, Lincolnshire. In 1981 part of an Iron Age timber causeway was excavated.  As can be seen in the image below, the site contained vertical and horizontal timbers of a trackway that once crossed an area of marshy, peaty land.  Associated with the causeway structure, were finds of ritually deposited metalwork.

In 2005, the tenant farmer put forward proposals to create a wet grassland habitat on the site.  Before the work started a series of surveys were carried out at the site, including fieldwalking, a borehole analysis of the underlying deposits, topographic and geophysical surveys.  To understand what impacts planned increases in water level would have on the causeway, monitoring equipment was installed and water levels and other water chemistry data were collected for three years, two of which were after the water level had been raised.

Our monitoring suggested that water levels were still not routinely above the height at which we thought the causeway was located so we funded an excavation to better understand the problem.  Unfortunately, as can be seen in the image below, it was immediately clear in the excavation that the horizontal timbers of the causeway no longer survived. They had decayed as a result of the previous 25 years of ploughing and deep agricultural drainage.

We had assumed it was still there, based on its previous condition, rather than actually investigating ourselves.  Instead, we had relied upon non-invasive techniques which gave us useful background, but didn’t directly inform us about the current state of preservation.  With hindsight, we would do things very differently now, but at the time we felt that it would be better not to disturb the burial environment by undertaking an excavation.  Experience from Fiskerton, and from a large scale research project to look at wetland monuments in Somerset (the MARISP project) have shown that even though such excavations might lead to small, localised and short term changes, they are necessary to allow you to properly understand the site, its significance and state of preservation.

The information the guidance indicates should be collected isn’t a big departure from that already collected during an evaluation excavation, as it is essentially reiterating existing sector standards produced by the Chartered Institute for Archaeologists which identify ‘state of preservation’ as one of the pieces of information that result from a field evaluation (CIfA 2014).

The change in practice we do wish to encourage is for that process of preservation assessment to become more commonplace; to be given greater recognition in evaluation reports, and for the results of what is often specialist analysis to be available in time to inform decision-taking about site management.

As with all planning work, the key to successfully integrating archaeological remains into development projects is early and constant engagement between archaeologists, planners and developers, to ensure the right information is collected at all stages of the project’s development.  The guidance document outlines what information is needed, and how it should be collected.  It contains sections on preservation assessment techniques; identifying development impacts; understanding the water environment around waterlogged sites; and finally decision-taking, mitigation strategies, and water monitoring.

To keep the guidance document short and make it more readable, we placed lots of technical detail into appendices.  These cover:

These appendices and the main guidance document have been written by Historic England staff (Jim Williams, Jane Sidell and Matthew Canti) and external consultants (Claire Howarth – Mott MacDonald; Ian Panter – York Archaeological Trust; Glyn Davies – ArcHeritage).  All are available to download for free from our webpages, along with other guidance on preservation in situ. 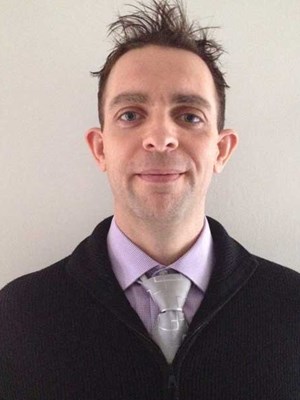 Chartered Institute for Archaeologists 2014b Standard and guidance for archaeological field evaluation. 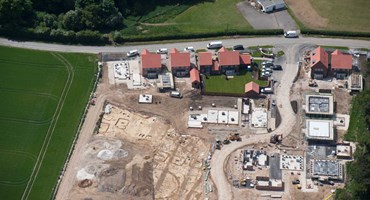 Announcing a project to work towards solutions to important issues within the archaeology sector in England.

Heritage science encompasses all technological and scientific work that can benefit the heritage sector.

See our advice and guidance on archaeological science.